How to Train Your Dragon Review.

Thoughts:﻿ How to Train Your Dragon is a 2010 DreamWorks animated fantasy film staring Jay Baruchel, Gerard Butler and America Ferrera. As I have said previously I am not the biggest fan of kid's animated films like Pixar or most DreamWorks despite my interest in the art of animation. However, How to Train Your Dragon was different in that it felt more like a great fantasy film and less like a kid's animated movie. There was a surprising lack of humor, especially for a DreamWorks film, if How to Train Your Dragon's story was used in an live-action movie it would have mostly worked well. Also the action was actually really well done, probably the best in a 3D animation feature film. There were things in the movie that I did not expect for a family film, those things just are not in most animated movies, with the exception of Mask of the Phantasm. The only family animated I have seen that is better than How to Train Your Dragon is Rango because it was so ridiculously hilarious. Without spoiling the plot, the reason for the main character Hiccup to "Train" his Dragon was actually really clever, opposed to what one would expect from such a movie. The soundtrack is another highlight, it has one of the best I have ever heard in a film (more on that below). The look and atmosphere of the world is fantastic, in some ways similar to one of my favorite video games, Skyrim. The only real problem with the movie was the main character Hiccup in the beginning of the film. Although he needed a starting to grow as a character, he was far too much of a wimp upon his first encounter with a Dragon, being almost unlikable until later in the film. However, that is a small quibble to an overall fantastic animated film.

The Bad: Hiccup was too much of a wimp in the beginning,


Plot: The island of Berk is a Viking village that is plagued by attacks from dragons that steal their livestock and burn their homes. Hiccup, the awkward son of the village chieftain, Stoick the Vast, uses a cannon contraption he invented and shoots down a dragon he thinks may be a Night Fury, a rare dragon nobody has ever actually seen. Hiccup locates the dragon in the forest, but finds he is unable to kill the helpless animal. Hiccup instead cuts it free, and the dragon disappears into the forest. Meanwhile, Stoick assembles a fleet to seek out the dragons' nest, but before he leaves, he places Hiccup in dragon-killing classes taught by Gobber, the village blacksmith

Note: All rating relative to other animated films, not live action.

Plot: 9.0/10- While there were a few "kid's movie" type plot points, it rarely felt like a kid's movie in any way. The story was surprisingly mature and went places were I did not expect. In some ways it reminded me of E.T. the Extra-Terrestrial in the "boy befriends strange creature" part, however the reason for it was just so clever yet rightfully understated. The exposition in explaining the dragons and the world the characters inhabit was done very and never slowed down the plot. One of the background characters even was a "Dungeons and Dragons" type nerd in his knowledge of the dragons and it made slight references to other fantasy films. Plus the teen-romance that often handled poorly was written very well, one of the best for a family film.

Action: 9.3/10- The high-flying action was spectacular, particularly for an animated film! The dragon battles actually showed the fighting between the creatures, unlike many other family films and the shot were all framed is skill.

Acting: 8.6/10- Jay Baruchel's performance was solid in the lead role and played the wimpy character well just like he does in his live-action roles. America Ferrera gave a stand-out fantastic voice performance as Astrid, giving the character depth. Other notable background actors were Jonah Hill, Christopher Mintz-Plasse and Gerard Butler all giving solid voice performances.

Art Style: 9.3/10- While the film is two years old, the animation is still just as stunning as ever. The quality of the furry and hair was top notch, which is often difficult to get right.

Soundtrack: 9.9/10- Wow, all I can say is just wow! The soundtrack was amazing, one of my favorite new Top 25 favorites. It captured the Viking setting perfectly, John Powell couldn't have done it any better.


Comedy: 7.9/10- Surprisingly there was not as much humor as one would expect from a Dream Works film, however what was there usually was humorous. The fact that the humor was not the main point of the film actually helped it to be taken more seriously, ultimately adding to the movie.

Would I Watch This Again: Most definitely, one of the few animated movies I want to watch again.

Overall: 9.0/10- Overall How to Train Your Dragon is a fantastic movie with a great ending and amazing visuals. An absolute must see for any fantasy fan.


Closing Comments: How to Train Your Dragon is a perfect example of how make a great fantasy film, with good atmosphere, fantastic music and a fun story. 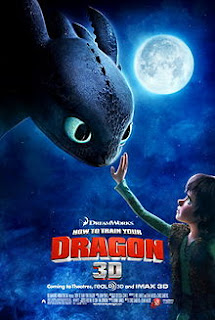 Posted by James the Reviewer at 7:05 PM

Email ThisBlogThis!Share to TwitterShare to FacebookShare to Pinterest
Labels: How to Train Your Dragon, movie review, review