If Quentin Tarantino made an animated series the likely outcome would be Baccano, a short 13 episode series about 1930s American crime with elements of fantasy and a ton of action and humor. Baccano is bombastic, violent, hilarious, and absurdly entertaining, and it has gangsters, guns, witty dialogue, blood, action, and a soundtrack that perfectly fits the 1930s setting with equally bombastic tracks throughout. To get a feel of what the series is like, watch its opening below, it is one of the best theme songs of all-time. Also, since the entire series is on Hulu (and I think Netflix) you watch it free!

The Bad: Can be confusing at first, 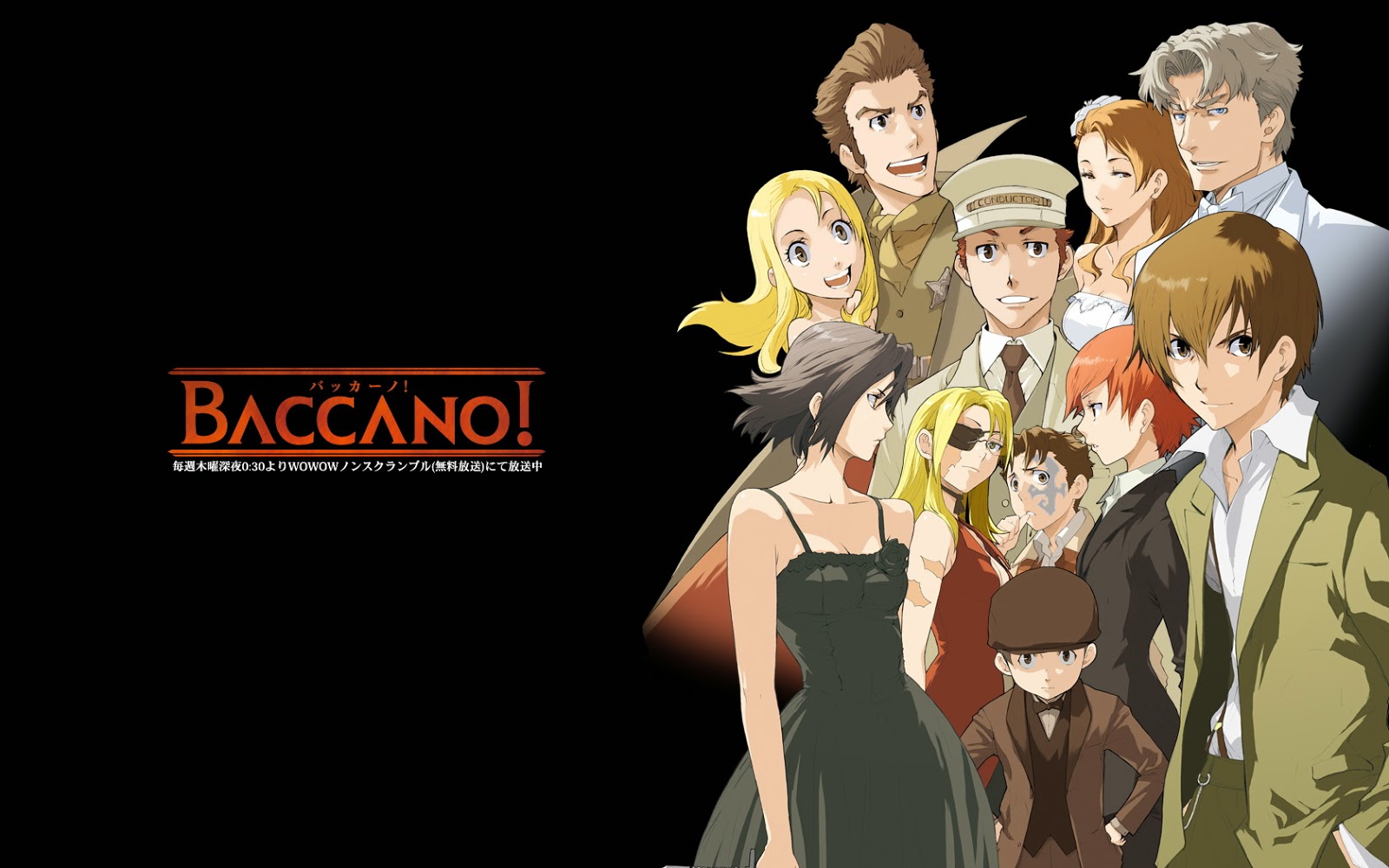 Plot: 8.6/10- Baccano is Italian for ruckus or rowdiness, and that is exactly what Baccano's story feels like, a ruckus of different things all mixed together in a brilliant combination of fun insanity. Baccano's plot is shown out of chronological (similar to Quentin Tarantino's films) with the opening scenes taking place at the end of the story, and then it switches between three different timelines for the majority of the series. In the first two or three episodes, Baccano can be a little confusing. With the three different timelines to keep track of, and all of the different characters that appear in each timeline, some viewers might find the show too confusing for their liking, but, to me at least, it become relatively easy to follow the story after the third episode. Aside from the possible confusing presentation of the story, the plot is full of twists and turns that you rarely see coming. On a side note, watch the three OVAs of the series since they are absolutely necessary to the enjoyment of the series since they offer better closure. However, on Hulu they are listed as episodes 14, 15, and 16, so just watch the series in order (I did not know they were OVAs until after watching the series).


Characterization: 8.9/10- Despite the short length of the series, Baccano's insanely large cast of likable and generally awesome characters are well realized and are even given distinct personalities and traits. The most notable characters are Isaac and Miria (gif below), who are the most lovable pair of morons in the history of fiction. They are criminals that rob banks and such, but they are generally nice and befriend everyone around them. Not only are they positively hilarious, they are the best aspect of the entire series. As the series says in an episode, "Isaac and Miria Spread Happiness Without Realizing It," and is exactly their effect on the audience as well.

Another noteworthy character in Baccano’s incredible ensemble of awesomeness is Ladd Russo (gif below), a psychopathic maniac that is a part of the infamous Russo family mafia. He is bombastic and loves to kill. Think of him as if the Joker was loud and bombastic, while still being insane. Other characters that are memorable include the bootleggers, Jacuzzi Splot and Nice Holystone, the Martillo family mafia members, Maiza and Firo, and there is another incredibly cool character that I cannot name without spoiling the plot. Since there are so many characters in Baccano, going into detail about all of them here is nearly impossible, so just watch the series and enjoy.

Action: 8.9/10- Most episodes of Baccano feature impressive and fluidly animated action scenes that are reminiscent of American action films such as Indiana Jones. In general, there are a lot intense gunfights and brutal hand-to-hand combat, which are animated with style and a general sense of fun, even if there is a lot of blood going everywhere.

Acting: 10/10- Baccano's English dub is, as Dallas Genoard would say, "Freaking Unbelievable!" Seriously, unless you feel as though you have to watch the sub for every anime that you watch, Baccano's dub is an absolute must considering that most of the characters are Americans anyway, and that the accents for the New York mobsters and other characters sound more authentic. J. Michael Tatum should be given special praise for his incredibly fun and over-the-top portrayal of Isaac and the cast in general is just fantastic. In short, Baccano is one of three series that if you are not watching dubbed, you are not watching it at its best.

Art Style: 9.0/10- While still retaining some of the general traits of an anime, Baccano's art style perfectly suits the 1930s setting. Most of the character models are well designated and unique. Despite some ridiculous physics and one fantasy/sci-fi element, Baccano stays relatively grounded in reality with its animation, which you can see in these gifs. Also, it should be noted that Baccano has absolutely no fan-service.

Soundtrack: 10/10- Baccano's soundtrack is flawless! It is filled with upbeat and fast paced big band music that perfectly fits the 1930s era. It is one of the soundtracks that I listen to the most, and you can listen to one of the best tracks in the video below.

Humor: 9.5/10- Baccano is positively hilarious throughout! However, Baccano has a dark sense of humor that may not appeal to everyone. It often sends conflicting tones of humor and violence, which can be a major turn off for some. That being said, Isaac and Miria are two of the funniest characters ever!

Opening and Ending: 10/10- Baccano's opening is my personal favorite opening of any anime. As much as I like Cowboy Bebop's opening, Baccano's takes the number one spot for me, and it is one that I listen to often. However, the ending is not particularly memorable or worth listening to because you will want to watch the next episode as soon as you finish the last one.

Non-Otaku Appeal: Baccano is an excellent gateway anime for those that enjoy the style and over-the-top violence and action of America films such as Quentin Tarantino films.

Overall: 8.9/10- Thanks to its memorable characters, surprisingly American style, hilarious humor, and utter insanity, Baccano is a classic that is not to be missed by anyone, providing potentially confusing storylines are a turn off.

Closing comments: If fast paced action, violence, and humor is your thing and you are new to anime, Baccano is a great place to start. If you are already a fan of the medium, what are you waiting for? Watch Baccano!

Note: One important thing to know about Baccano before watching is that it is a very violent series. It is often hilarious, but there is plenty of animated blood, gore, and death. If you are sensitive to that, Baccano is probably not for you.

Also, if you have reviewed this anime, leave a comment with a link to your review and I will post it here (providing it does not contain any explicit content).

Below is the first episode of the series. After finishing that, you can click here for the series in its entry on Hulu, and if you live overseas and cannot watch Hulu, here is a link to the series as well. Also, it should be noted that the first two episodes are not particularly that great compared to the rest of the series.