Spice and Wolf is a historical fantasy series set during the medieval period of Europe. Unlike most other medieval fantasy works, it is not some epic quest to save the land, but rather, it is about a typical merchant of the era named Kraft Lawrence and his life after he meets a mysterious wolf girl named Holo. While there is some fantasy action, the series is more about medieval economics and the wonderful character interaction between Lawrence and Holo. Also, the series is incredibly short with only 13, 30 minute episode, which makes for a quick watch compared to most other series. 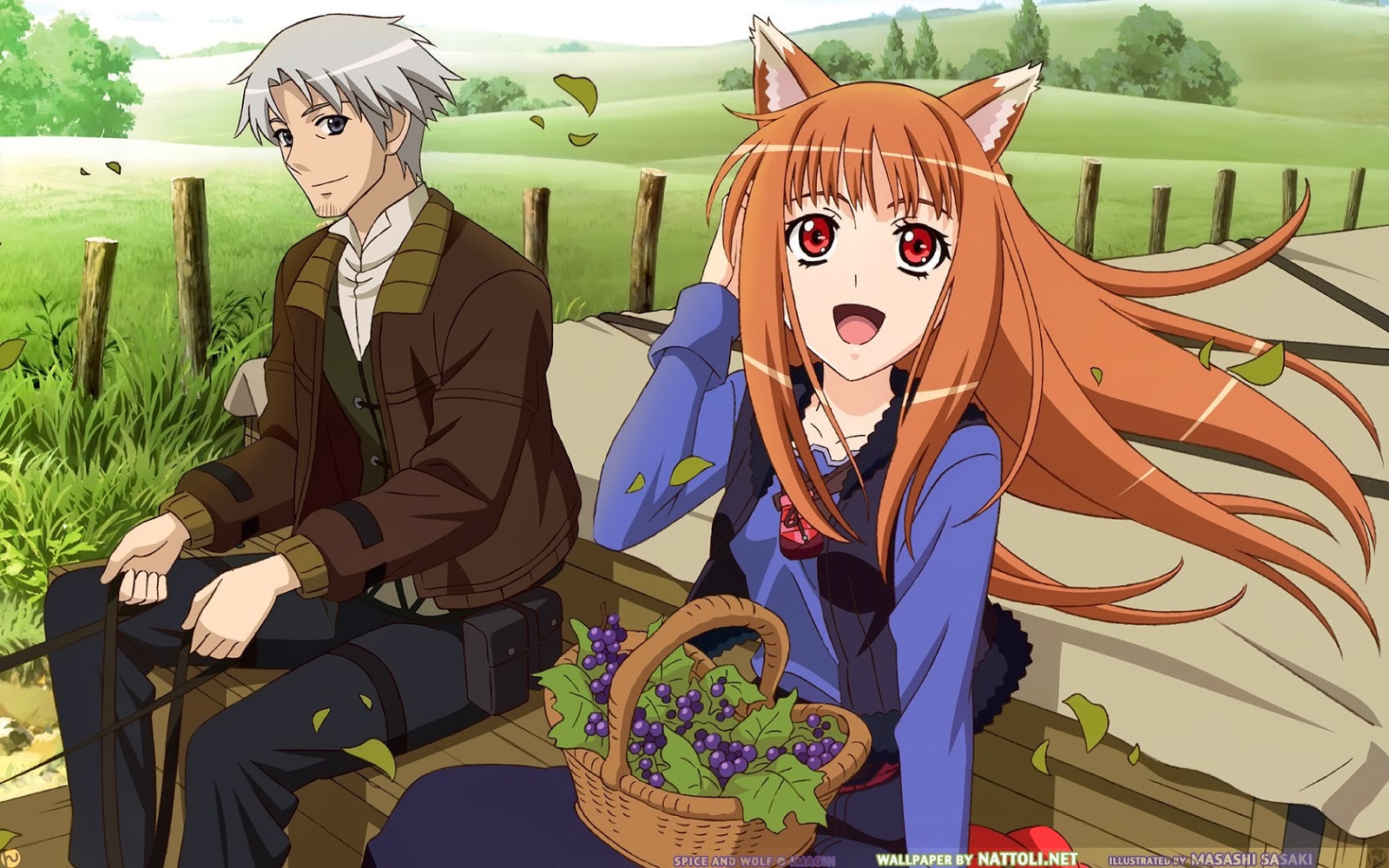 As much as I enjoy epic, action-packed, fantasy adventures among the likes of The Lord of the Rings and Princess Mononoke, sometimes a more character driven story with witty humor and excellent dialogue can be just as enjoyable, and that exactly describes Spice and Wolf. In Spice and Wolf, a merchant, named Kraft Lawrence, that is passing through a village to trade as he usually does, but before he leaves, he finds a beautiful woman sleeping in his craft. He soon discovers that she has wolf ears and a tail. The woman, named Holo, explains to him that she is a Yoitsu from the far off lands of the north where there are others like her. Several hundreds years prior, the inhabitants of the village believed her to be a deity, similar to the Asgardians in the Thor films, and thus the legend of Holo the Wise Wolf was born. Since she is a Yoitsu, she can control how well the wheat harvest goes for the people of the village. Everything else is explained in the few episode of the series, so go watch it if you want to know more about the premise.

What sets Spice and Wolf from most series, among other things, is Holo. Despite first impressions, she is not your typical tsundere; Holo is a very complex and layered character that is both humorous and thoughtful. While she might not be the strongest or most bada** female protagonist around, she is given a lot of depth and character development. She has her moments of being awesome, yet she has a realistic weak side her to character, which humanizes her.

My only complaint about the series is the few negative comments by a few characters towards the church, granted, some of the churches during the medieval period were corrupt.

The Bad: Some of the economic jargon is dull,

Plot: 9.4/10- At first glance, you might think that the series is a fantasy romantic comedy, and while there are elements of comedy, and some non-corny romantic elements, Spice and Wolf is really about three things: Lawrence's life as a merchant, medieval economics, and most importantly, the pitch perfect character interaction between Lawrence and Holo. Even though the individual stories are not mind blowing amazing, the originality and uniqueness of the series sets it apart from basically everything else out there, particularly in the genre of animation. Bargaining and making business deals seem boring, but, to me at least, that aspect was entertaining because it was most unique and I have always enjoyed the real life bargaining series like American Pickers and other similar series. The dialogue is positively perfect; it is well written and full of wit. The setting is well thought out and the medieval aspects are very believable. The series only noticeable weakness is some of the medieval economic jargon, which can make a few plot points difficult to follow since we, as an audience, most likely have no knowledge of the subject. However, being a history buff, the historical setting was great and interesting to learn about (it makes me want to know more about the time period). One odd thing about the setting is that one minor character appears to be wearing modern eye glasses. Additionally, the atmosphere of the series is amazing! The series felt so warm and inviting that I wish I could spend many more hours in its immersive world. It should be noted however that some viewers might find the pacing too slow for their liking, which is understandable since the series is dialogue heavy. 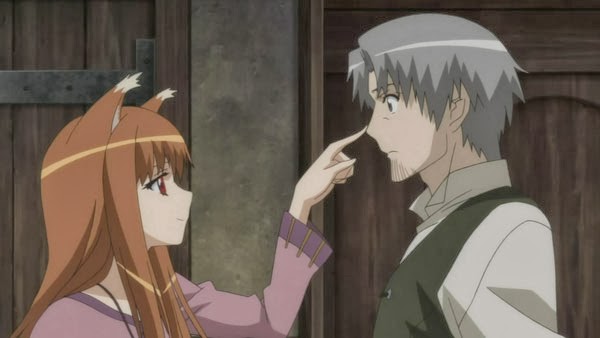 Characterization: 10/10- Holo and Lawrence are two of the most entertaining characters to watch I have seen. Their interaction is not necessarily romantic, but rather playful and fun. You could say that Spice and Wolf is a romantic comedy since a relationship develops between Holo and Lawrence throughout the series, but they more act like they are two people that genuinely enjoy each other's company, opposed to some shallow romance. If I were to rank my favorite female characters in anime, Holo would likely number one on the list, or at least a very close second, because she is such a entirely unique character. She has elements of other characters, but her mix of wisdom, naivety, playfulness, and a deep sense of loneliness makes her both deep and fun to watch. Lawrence is also a very strongly developed character with his own unique character traits. While Spice and Wolf is mostly about Holo and Lawrence, there are other side characters that add to the experience and their time in the series is memorable.

Action: 4.2/10- Spice and Wolf is not an action series; that being said, there are a few fantasy battle scenes that are well animated and fun to watch.

Acting: 9.6/10- Even if you generally prefer subs, at least give the English dub a try. Since none of the characters are actually Japanese, it makes more sense to watch it in English, plus the dub is fantastic! While the exact place in Europe is not specified, I assume it is not England since the characters have American accents, and not British ones. Brina Palencia should be given special praise for perfectly portraying the role of Holo. Her acting added the complexity and humor her character embodies perfectly. J. Michael Tatum is reliable as ever as Lawrence, giving yet another strong performance. The rest of the cast is overall strong without a single weak performance among the cast. 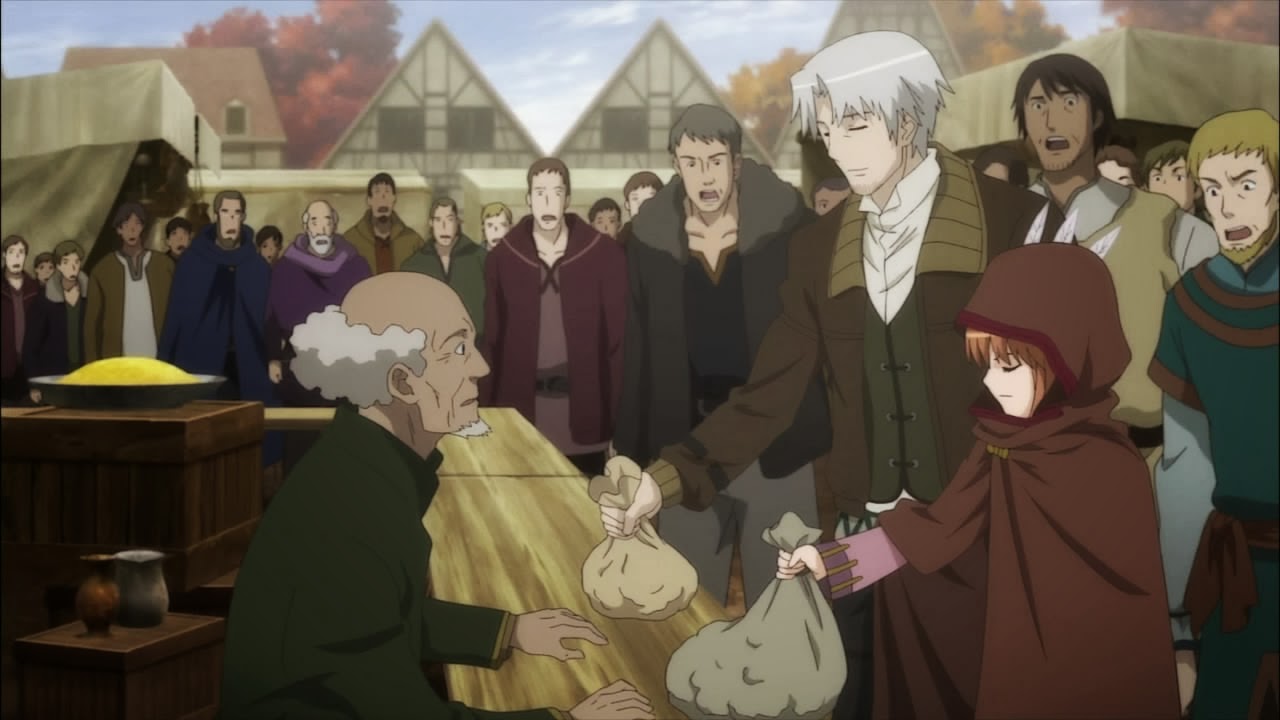 Art Style: 9.5/10- Despite not being the most detailed animation ever, the animation is positively beautiful! It is pleasing to look at with its soft edges and natural looking backgrounds. Some of the characters are a little too angular, but Holo's character design is particularly worthy of praise. In terms of style, the animation does not really have the feel of a typical anime, with the exception of the eyes, which should make the series more accessible to none fans of the genre. Also, the animators do an excellent job of utilizing her tail and ears to allow her to express a wider range of emotions.

Soundtrack: 9.2/10- Spice and Wolf's soundtrack perfectly suits it medieval setting with tracks that make you feel as though you are in the middle ages. The score ranges from upbeat and fun, like the one below, to slower and drama, and to epic, depending on the context.

Opening and Ending: 9.4/10- Spice and Wolf's opening is nothing short of beautiful. It perfectly fits the series' tone and overall style. It is slower than the usual opening, but great to listen to nonetheless. The ending is catchy and fun with its nonsensical Engrish lyrics.

Humor: 9.5/10- Spice and Wolf is not a series that will make you laugh out loud all the time with its humor but, it is witty with its humor. Holo's teasing of Lawrence and her general character traits provide the main source of humor. For me at least, I was smiling throughout most of the series since almost the entire series is entertaining and all around fun becasue the characters were so likable.

Overall: 9.5/10- With its slower than usual pacing and a heavy reliance on character interaction, Spice and Wolf is not for everyone. That being said, those looking for a fun medieval fantasy with lovable characters and a generally unique story, Spice and Wolf might be for you.

Closing comments: For non-fans of the genre, if you can get past the one thing that I explain below, Spice and Wolf might be a fun and short series that you should consider watching since the entire series is on Hulu in both the sub and dub.

Note: One potentially off putting element of the series that should be noted is the inclusion of what could be considered fan-service. During a few parts of the series, when Holo transforms into human form, she is not wearing clothes, however she only appears to have the shape of a female human but with the physical detail of a doll. With the exception of one very brief scene, that aspect is generally not depicted as fan-service. I generally think of it like Mystique in the X-Men movies.

On a personal side note, Spice and Wolf is the type of series that makes me happy just watching it, which was especially noticeable since, at the time of watching it a few weeks ago, I was under a lot of stress with college. So, Spice and Wolf helped me calm down and be happier, therefore I am inherently biased towards it because it is my kind of entertainment.

After watching the episode below, you can click here check out the series on Hulu, and if you cannot get Hulu in your country, you can watch the series here.

Note: This is a review for the first season of Spice and Wolf, not the second, which is named Spice and Wolf II. At the time of writing this review, I have not seen the second season (I have seen it now but not when writing the review).


Click here to check out more of my reviews.

Posted by James the Reviewer at 7:14 AM