As I said in yesterday's review of Pacific Rim, here is my review for the series that obviously inspired it, Neon Genesis Evangelion. 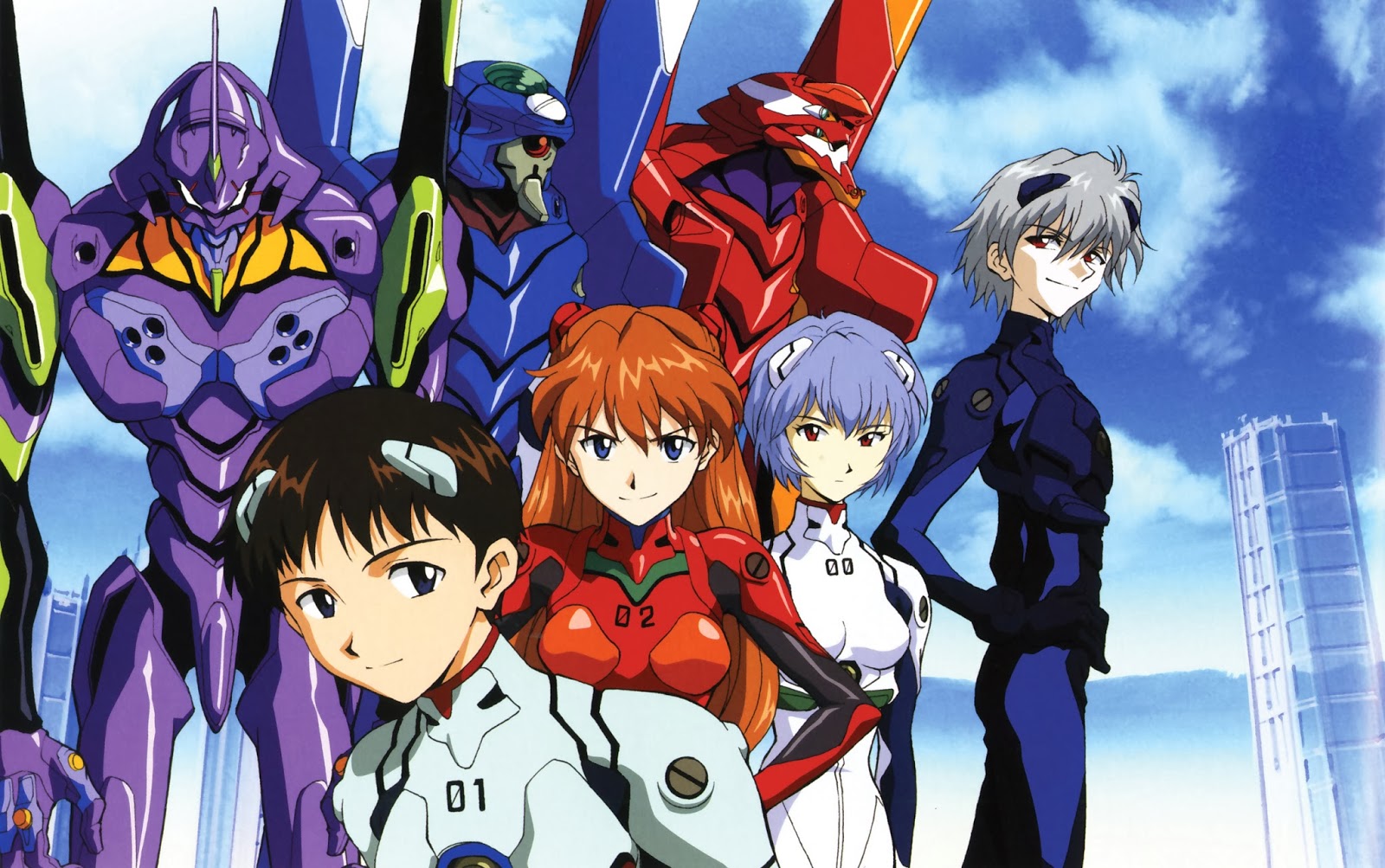 Neon Genesis Evangelion (or NGE for short), is a critically acclaimed animated series about several teenagers who pilot large robots named, EVAs, to save the world from the mysterious monsters named "Angels." While the description of the might sound generic, clichéd, and juvenile at first glance, Neon Genesis Evangelion is far from any of those things being one of the most mature and mind-bending series I have ever seen. The series revolves around the character Shinji Ikari, a fourteen year old kid that is chosen to be the pilot of the Eva02 because he was the best match to the unit's unique control system. Even though the overall plot of NGE is about him and the other kids stopping the Angels, the real story is Shinji and the other character’s inner struggle to overcome their psychological issues, but more on Shinji and the other characters later. As Shinji and the others must discover how to defeat all of the angels, there is a darker mysterious subplot going on behind the scenes, which adds much intrigue to the series (even if the resolution is less than satisfying).

The show starts relatively slow with the first four episodes being good, but not great. However, by about episode five I was invested in the characters and story and until, episode 24, I loved the series. Many of the episodes range from lighthearted and humorous, to dark and dramatic, and even though the series features many characters, most of them are well developed and unique.

Unfortunately, NGE's biggest weakness is the show's ending, or lack thereof. While I did enjoy the mind-bending and philosophical ending, there was almost no true ending. No resolution to anything, just two strange episodes that are not related particularly related to the rest of the series, granted, I did enjoy them more than most. However, due to fan outcry, the creators of the series did make the film The End of Evangelion, which provides the series with a more definitive, albeit no less nonsensical, conclusion that retcons the final two episodes of the series. Obvious, The End of Evangelion is a must watch if you watch the series, however it is rated "R" for a reason.

The Bad: Odd character change in episode 24, Lack of resolution,

Plot: 8.5/10- Being a deconstruction of the mecha genre, Neon Genesis Evangelion effectively puts a spin on the usual tropes of the genre. As much as I like NGE, the series conclusion and overall plot do not make a lot of sense and End of Evangelion does not help make things any clearer. For whatever reason, I enjoyed it, but the creators were obviously making things up as they went along. Despite the lack of coherency in the plot, the themes covered throughout the series are great and thought provoking. Also, NGE’s tone can be all over the place at times, and while that is a bad thing for me, it can be jarring to some. Even though going into detail is not possible, the series is filled with tons of symbolism. One last thing to mention is that the series is completely messed and sometimes disturbing. There is a lot of psychological torment and horror that the characters go through.

Characterization: 10/10- NGE has one of the most unique and deep cast of characters from any anime. Unlike most series where at least one character is inspiring and strong willed, all of the characters in NGE have some kind of psychological issue that was caused by their past that they must overcome, even if that does not happen for all of them. If you want an uplifting story and characters, NGE is not for you. Every character is screwed up in the head. Now, let us take a look at a few of the main characters of the series.

Shinji Ikari: Shinji's character is often criticized for always as whining and being an around wimp. While it is certainly true that Shinji is a wimp most of the time that is one of the best aspects of his character since he develops into a different character by the end of the series. He is the underdog type character that is never sure of his self, but that makes for a great hero. Actually, Shinji's being a wimp makes him one of the most realistic characters I have seen. Consider if you were thrown into his situation when you were only a fourteen year old, do you really think that you would do much better? He is a deep and complex character is a lot of personal issues. Despite being a generally well crafted character, he goes through some strange changes near the last four episodes of the series.

Rei Ayanami: Rei is the first pilot of an Eva, and she is often referred to as “The First Child.” She has a robotic, emotionless personally and her character’s background is steeped in mystery. Rei’s generally emotionless character traits has created one of the most used archetype in the genre.

Asuka Langley Soryu: Asuka (gif on the right) is introduced in episode 13 of the series and she is the pilot of Eva Unit02. Even though she is somewhat the stereotypical "better-than-everyone/mean girl," (aka tsundere) that is what makes her so much fun to watch. She often provides humor and her character is well developed later in the series. Asuka is probably my favorite character of the entire series.  Despite her proud exterior, she is a troubled and complex character with a dark past that she tries to overcome. Also she is one of the only non-Japanese characters in the series.

Misato Katsuragi: Misato is not one of the Eva pilots, but one of the lead commanders of NERV, the military unit that protects the world from the Angels. Misato is another often humorous character, with a dark backstory. Her character has some great development throughout the series.

Action: 8.9/10- While NGE is of the mecha genre, the series is not always action packed with many episodes focusing on the characters. That being said, around half the episodes feature some awesome giant mecha vs. monster battle that are more than just generic punch until the monster died. Many of the battles require clever tactics, which is something that I always enjoy seeing.

Acting: 8.0/10- At first the English Dub of NGE was difficult to become accustom to, however, many of the actors grew on me as the series progressed. Spike Spencer as Shinji did a convincing job with the character showing the character’s progression effectively. Tiffany Grant as Asuka was perfect for character with her snarky wit and humor. Most of the main cast did a fine job in their roles considering the time. However, there are a few minor characters that have positively atrocious voice acting, and they could have been better, but that only lasts for about 5 minutes throughout the entire series. As usual the sub is fine and always a good option if that is what you prefer.

Art Style: 8.9/10- At the time of me watching it, NGE was the first relatively old anime that I had watched, and while becoming accustom to it was difficult at first compared to the bright and crisp animation of most modern series, it grew on me and I started enjoying NGE’s style. Sometimes the animators took shortcuts like having something strategically placed in front of a character’s mouth when talking so that the lips did not have to animated, and there were other scenes with literally no movement for a solid minute or two. But other than those scenes, the animation in the action was impressive.

Soundtrack: 9.2/10- The soundtrack is another strong point of NGE. The "Decisive Battle" track is a particularly strong track that adds an epic bombastic tone to the battle scenes. In the more lighthearted moments of the series, the score is equally fitting with Misato's theme being light and fun.

Opening: 9.6/10- NGE had one opening song throughout the series and it has to be the best one I have seen for an anime. "Cruel Angel's Thesis" is one of my favorite songs and one that have listened to many times outside the series. While the visual aspect of the opening are kind of mind-bending and trippy,like the series becomes later in its run, the music is fun and catchy.

Humor: 8.2/10- Although many episodes featured no humor, just as many of the episodes had at least some humor, mostly from Misato and Asuka, who added the levity needed to balance the often dark themes.

Overall: 9.1/10- Despite a less than preferred conclusion, Neon Genesis Evangelion is a one of my favorite series with some of the best characters in all of anime. It combines a mature and complex plot with epic action to great effect. To me, everything except for the last 3-4 episodes and End of Evangelion would receive a score 9.3/10, and even though I would like to forget the worst parts of the series, I cannot, therefore the overall score is a little lower.

Closing comments: Neon Genesis Evangelion is mandatory viewing for any and all anime fans since it has made such a large impact on the genre. For non-anime fans however, and you want to watch something like Pacific Rim, providing you do not mind something that is weird, complex, and sometimes disturbing, watch NGE. If not, wait until you are more familiar with the genre and then watch NGE.

Unfortunately, copies of NGE are incredibly difficult to find, but you can the entire series here at this link.

For another opinion of the series, you can check out Arvin Saints' review of Neon Genesis Evangelion here. If you have reviewed the series, please let me know. I would be interested in reading it.

Click here to check out more of my movie reviews.
﻿

Posted by James the Reviewer at 6:12 AM