Ghost in the Shell Review.

Ghost in the Shell, the film inspired the Matrix, and a film that was far ahead of its time, and one that is getting a live-action Hollywood adaptation coming in a few years.

Ghost in the Shell is a one of the classic anime films that introduced many American audiences to the genre. My expectations for Ghost in the Shell where relatively high considering that the film is said to be similar to the Matrix and that the genre of sci-fi is usually my type of thing. Except for a few minor flaws, Ghost in the Shell was satisfying and smart action thriller that presents complex themes of technology that are even more revelation today than they were years ago.

According to Wachowskis, Ghost in the Shell was said to have inspired the Matrix, which is one of my favorite movies of all-time, and the similarities are noticeable, particularly the setting, granted, there are plenty of differences. Ghost in the Shell reminded me of a combination of Blade Runner and the Matrix since it shares many of the concepts that both films explored. While some of the concepts are confusing at first and definitely require further thought to fully understand what the film is trying to accomplish, anyone that enjoys a complex message about technology should watch Ghost in the Shell.

On a side note, Ghost in the Shell was one of the first anime films that I had seen when I watched it for the first time last year. At the time, Akira was the only other anime movie that I had seen. Since then however, I have seen about twenty other feature length anime films.

Warning: This film is rated "R" for violence, profanity, and other mature content.


Plot: The following plot summary is copied from Wikipedia.com.
In the distant future, the world has become interconnected by a vast electronic network that permeates every aspect of life. Much of humanity, including the protagonists, has direct access to this network through cybernetic bodies, or "shells", which possess their consciousness and can give them superhuman abilities.
Major Motoko Kusanagi, a female police officer and leader of Public Security Section 9's assault team, is assigned to capture an elusive hacker known as the "Puppet Master". Her team, Batou and Ishikawa, triangulate their activity with a garbageman. The man believes he is going through a divorce and thinks he is using a program obtained from a sympathetic man to illegally ghost-hack his wife's mind to find his daughter. Kusanagi and her team arrest both the garbageman and the man who gave him the program, but they discover that both men's memories were either erased or implanted, which means they themselves were ghost-hacked by the Puppet Master, who remains at large.
Watch the movie to see what happens next.


Plot: 9.0/10- Ghost in the Shell combines the genres of psychological thriller and sci-fi thriller with a very complex plot. At first glance you may think it is a standard sci-fi action film, that, however, is not the case. While there is some action, the Ghost in the Shell is more complex than the typical science fiction movie and it requires a surprising amount of thought to comprehend the plot. Due to the film's short length, a sizable amount of the exposition is told through dialogue, which works for the most part, but it does give an odd "tell not show" presentation. 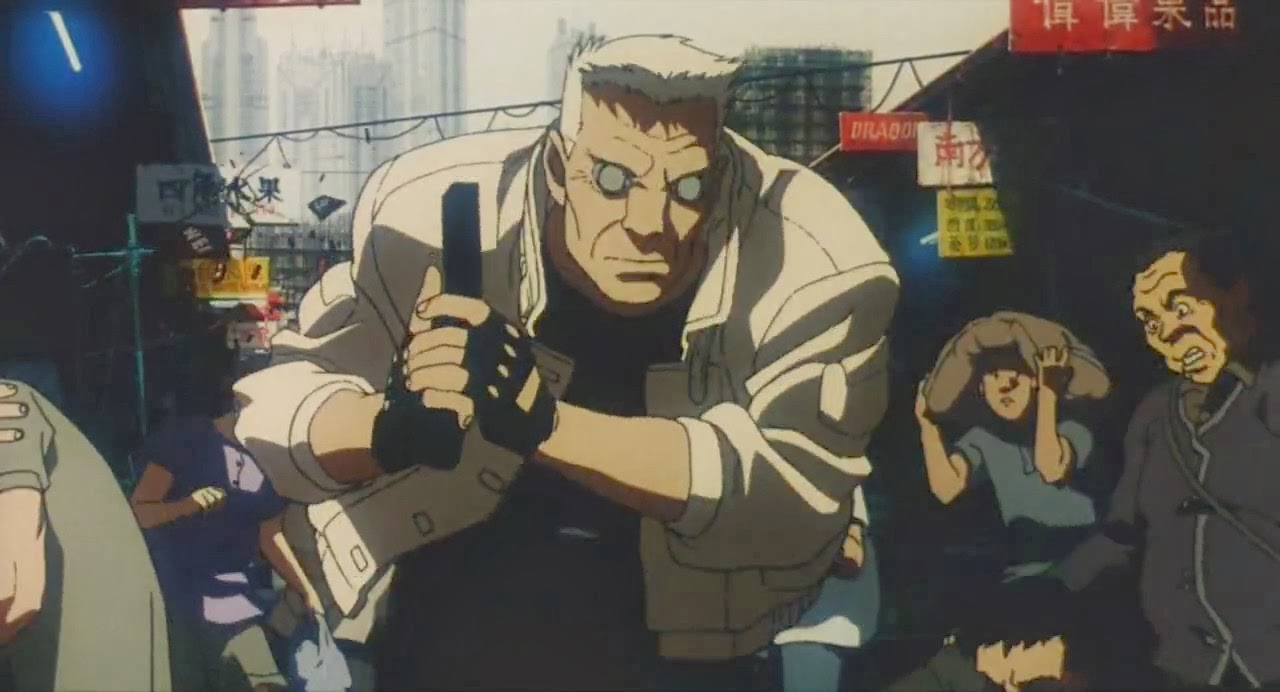 Unlike like many movies that try to convey some "deep" philosophical message that either was a lot less meaningful than the creators thought it was or make no sense entirely, Ghost in the Shell's commentary on technology is quite fascinating and well thought-out. Many of the same concepts have been used in other films, most of which where made after Ghost in the Shell.
My only issue with the plot is, as I stated earlier, it has a tenacy to tell and not show what is happening or why the characters feel as they do. On the topic of characters, while the characters are well realized enough to move the plot forward, the film does not give enough time to develop them, fortunately however, there is a TV series and manga to watch/read.
Also, the mystery element is quite good, albeit not a main draw.

Action: 8.4/10- Ghost in the Shell has several unique and inventive devices that are used excellently in the film's action scenes. Since the main protagonists are essentially cyborg-robot, there are few limits on what they can do in an action scene, which makes for some great set-pieces. Another thing is the Thermo-optic Camouflage, basically what the Predator uses in stealth mode. There are several awesome scenes that unitize it well. Although the action that is there was great, I almost wish there could have been more because it was done so well, but that is actually not a big issue.

Acting: 8.2/10- Ghost in the Shell's only slightly weak point is its English Dub cast. While the main protagonist give decent performances, a few of the supporting cast members could have been better. Later in the film however, the cast started to grow on me and I ended up liking the voices for the main characters. It is also important to know that since the characters have cybernetic implants, they can communicate through their minds to each other and carry on conversations. At first the characters not moving their mouths during conversation is confusing and it is never actually explained, but that is important to know when watching the film. Additionally, as usual, the original Japanese audio is solid alternative with few drawbacks since you can't actually understand why the characters are saying anyway, and they at least as though they express a little more emotion.

Art Style (Original Version): 9.1/10- Considering when Ghost in the Shell was made, the animation is rather impressive for a film not made by Studio Ghibli. The animation is fluid, the backgrounds are well drawn, and the characters are mostly well realized.


Art Style (2.0 Version): 8.2/10- Unfortunately, when I first watched Ghost in the Shell, I watched the "enhanced" 2.0 version of the film since that was the only one was available at the time, and while it still had excellent animation, the CGI additions where entirely unnecessary. Also, the coloring is way off. If you watch the movie, do not watch the 2.0 Version, is it a waste of time when the original still looks so much better.

Soundtrack: 7.2/10- Occasionally the soundtrack is distracting and other times it compliments the films well, overall, good but nothing special.

Would I Watch This Again: Ghost in the Shell is a film that is worth re-watching because of the complexity of the plot.

Overall: 8.7/10- Overall, Ghost in the Shell is excellent and thoughtful anime film, but those unfamiliar with anime and complex stories about technology will likely not enjoy the film as much as I did. However, if you are a fan of the Matrix and would like to see what inspired the film, consider watching Ghost in the Shell; it is a classic.

Closing comments: Ghost in the Shell is a unique experience that could only have been done in anime, at least at the time it was made, and it is not to be missed by fans of the genre.

For another opinion on the film, you read Arvin Saint's review of Ghost in the Shell here.

Warning: It is important to emphasize that Ghost in the Shell is rated "R" for a reason and it certainly earns that rating with the violence and other mature content. One other thing should be noted is that the star, Major Motoko Kusanagi, wears a stealth suit that turns were invisible using active camouflage, however when she uses this suit, it is extremely skin tight and skin colored, but the male characters in the film can use the same technology while wearing regular clothes.

Posted by James the Reviewer at 6:10 AM

Email ThisBlogThis!Share to TwitterShare to FacebookShare to Pinterest
Labels: Animation, Anime, anime review, Ghost in the Shell, Matrix, The Matrix