With the recent release of the Hobbit: Desolation of Smaug, I have decided to post my review of the best fantasy epic not set in the land of Middle Earth, Princess Mononoke.

Plot: 9.8/10- Princess Mononoke appears to be a seemingly simple story at first; however the film turns into an epic fantasy adventure on a grand scale. Every aspect of the story is well developed including the characters, plot, and setting. The world building is executed expertly and never seems to delve into overly expository content. Many of the characters are morally ambiguous, with multiple characters all having their own goals. While the first 15 minutes of the film is not entirely capture my attention, after that, I was engrossed in the film and the world it created. The pacing is absolutely spot on, with just the right amount of action and story. In many ways, the film reminds me of a mix of Seven Samurai and the Hobbit (minus the goofy humor) in terms of its scope and scale. Even though there is a lot to like about Princess Mononoke, I do have a few minor problems. One being the odd ending, which went a little too far into the Japanese mythology for my taste. The ending is nearly as weird as something like Akira, but it is a little off putting. My other problem is that the film's environmentalist message was too heavy handed and felted forced at times. While it is not nearly as overstated and poorly implemented as Avatar, which obviously is influenced by Princess Mononoke, the themes are unnecessarily prominent.

Action: 9.5/10- To my surprise, Princess Mononoke is actually an action film to some degree. Ashitaka has several impressively animated fight scenes. The attention to detail during the large battles is fantastic, and the fluidity of animation during the battles is excellent. While not the best action I have seen in anime, the action serves the story very well.

Acting: 9.2/10- While mostly strong, Princess Mononoke's English dub does have some problems. At first, the dub was difficult to become accustomed to. However, after 20 minutes into the film, I started to enjoy the dub. Billy Crudup as Ashitaka gave a very strong performance and added many layers to his character. Claire Danes was also very strong as the conflicted San (Princess Mononoke). Minnie Driver as Lady Eboshi easily gave the strongest performance of the supporting cast. Billy Bob Thornton's performance as Jiko-bō was a little dodgy at times, and lacked consistency.  Keith David lends his recognizable strong voice to the film and gives an overall strong performance. Overall, the rest of the supporting cast is hit and miss. Some performances are fine, others could have been better.

Art Style: 9.5/10- At first, the animation was not particularly appealing to me. However, after watching the first 30 minutes, it started to grow on me. The attention to detail is immaculate and the fluidity of the animation is superb. A few of the character models are not my favorite, which is my general problem with what I have seen of Studio Ghibli's work; however, as with the rest of the animation, they started to grow on me. According to what I have read, some computer generated 3D is used, however it is barely noticeable, which is fantastic.

Soundtrack: 9.9/10- Princess Mononoke has a positively beautiful score by Joe Hisaishi. During the landscape frames, the soundtrack perfectly compliments the sweeping scope of the film. The score combines a few Japanese sounding notes with a fantasy like score. It reminds of something I have heard before but I cannot place. Below is the complete soundtrack.

Comedy: 5.8/10- Although there is some humor, Princess Mononoke is a mostly serious film.

Would I Watch This Again: Yes, most definitely yes; Princess Mononoke is a film that I will rewatch.

Overall: 9.5/10- Overall Princess Mononoke is an amazing fantasy epic, and while not for everyone, it is a film that has to be experienced for yourself.

Closing comments: Aside of films set in Middle Earth, Princess Mononoke might just be the best fantasy epic ever created, and to my surprise, it is one of my new favorite films.

If you want read more anime reviews, please check out my reviews of Code Geass, Death Note, and The Girl Who Leapt Through Time and, if enough readers are interested, I have several more anime series and movies reviews like Steins;Gate, Ghost in the Shell, Perfect Blue, Cowboy Bebop, and more.
Also check out Arvin Saints' review of Princess Mononoke on his blog Anime and Book Messiah. If you are interested in anime or books, check out his blog, I highly recommend it. 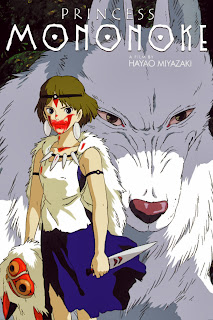 Posted by James the Reviewer at 6:36 AM