Today The Desolation of Smaug comes out in theaters! To prepare for the film, I bought and watched the Extended of Edition of An Unexpected Journey. Is it the definitive version of the film, or is it just an overly bloated edition of Middle Earth?
The Extended Edition adds about 15 minutes of additional footage seamlessly into the film, along with 11 hours of new behind the scenes footage and interviews. While this Extended Edition is a must own for any Tolkien fan, especially since it only costs five dollars more than the standard edition. As for the new scenes themselves, with the exception of a few notable scenes, they do not add nearly as much as to the film as the Extend Editions of the LOTR. The Extended Edition should be named, "An Unexpected Musical" because there are at least three more songs added to the film, two of which I have included below. While I am glad many of the new scenes were not in the original cut of the film, this extended edition will be the definitive edition for me and the one that I always watch. Obviously, spoilers for the film are ahead.
The scenes that are noticeably extended are the prologue, which adds some interesting information that was not in the previous cut of the film, and the scene between Elron and Bilbo added gravity to his decision to almost leave the group later in the film (was Elron and Bilbo's meeting in the theatrical cut?). Most of the other scenes consisted of humor and songs that were fortunately cut from the theatrical edition of the film, but those scenes are great to see in the Extended Edition. Most of the extended scenes take place during the prologue, Rivendell, and in the Goblin tunnels. Below are two scenes from the Extended Edition that I found on YouTube with my thoughts about the specific scene.

The Goblin King's "Goblin Town" song was fortunately not included in the theatrical edition of the film. While the song is not bad by any means, it just seems incredibly corny, especially the Goblin King's rockstar ending to the song. Also the Goblin King reading "Made in Rivendell" on the bottom of the Elven candelabra was kind of dumb, unless it was in the book.

Kíli mistaking an Elf man for an Elven Maiden is quite humorous and Bofur's song are fun additions to the film, even if they do not add much to the story. However, the scene between Elron and Bilbo is great.

Here is my favorite scene of the entire Extended Edition. The scene reminds me more of the Lord of the Rings than the rest of the film, and it should have been included in the theatrical edition.

The Movie: 10/10- Watching the Hobbit again for the first time since watching it in theaters was the most fun experiences I have had rewatching a movie since rewatching The Avenger for the first time. While the Extended Edition did not add much in terms of quality, the film itself is easily the best fantasy film since the Lord of the Rings, and even thought it never reaches the LOTR's level, it still remains one of my favorite movies.

Video: 9.9/10- An Unexpected Journey is easily one of my best looking Blu-Rays. Some of the CGI effects are more noticeable, but the video is crisp, and Peter Jackson's brilliant direction and cinematography look amazing in full 1080p.

Audio: 9.9/10- Howard Shore's score sounds amazing! Anything his main theme plays, you can literally feel it. The sound effects are all clear and easy to hear, plus the character's voices are much to distinguish watching it at home rather than in the theaters.

Extras: 10/10- The Hobbit contains part seven and eight of the appendices set that was started with the Lord of the Rings Extended Edition collection, which is cool because the other Extended Editions will presumably complete the set. While I have not watched the bonus features or listened to the commentary, I have read that they are just as comprehensive and detailed as the Lord of the Rings' bonus features. There is a short video about New Zealand and how where they filmed some parts of the movie, which is the only bonus on the main disc other than the commentary. My only disappointment with the extras is that a list of which scenes are added and extended is not present like the Lord of the Rings Extended Edition, which would have made noticing what parts were added significantly easier and the experience more enjoyable. While I normally would not care, the Blu-Ray's cover and box art is quite nice and looks great.

Overall 9.8/10- When it comes to Extended Editions of any film, my philosophy is more is always better, and pacing is not relevant because it will obviously be slower. While the Hobbit's Extended Edition is not the game changer the LOTR's Extended Editions were, if you are a fan of Middle Earth and Tolkien's writing, buy the Extended Edition of the Hobbit; it is a must have for any collection. The extras and relatively cheap pricing made it worth the purchase for sure, particularly if you do not already own the standard edition.

Note: Now that finals are over, I will try and catch with replying to comments, and thanks everyone for the comments and thanks to Jamie for filling in for me. 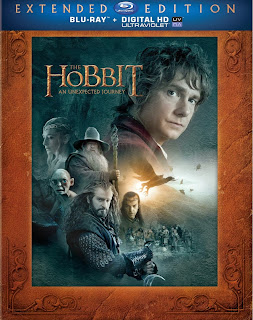