Thoughts: Code Geass: Lelouch of the Rebellion is a critically acclaimed anime series that is an absolutely must watch for anyone interested in the anime genre or great stories in general. Code Geass is exactly the type of show that I enjoy, mixing various genres into an incredibly unique experience that is nearly unmatched. Code Geass is about a high school student named Lelouch, who is given the power of Geass, which gives the ability to control the will of anyone that makes eye contact with; however there are limitations to his power that he later discovers. The series is set in an alternate future where Britannia has taken over a large portion of the world using their superior robot/mech force. It is important to note that this is a review for the first season, not the second season. Because it would take far too long to explain more of the overall plot, watch the first minute and a half of the first episode below, and everything else about the show is explained without spoilers, and then please read the rest of the review.

Now, back to the review. Code Geass is considered by many to be one of, if not, the best anime series ever made, and a definition one for this generation, and I have to completely agree, Code Geass an amazing series, not just a great animated one.
Code Geass combines many different genres into one seamless series, including, science-fiction, psychological thriller, action, high school (minor aspect), government rebellion, drama, political intrigue, fantasy, and the series does feature a small romantic subplot that is handled well. There is something in Code Geass for just about everyone.
The only thing that you need to know is that the series does take a few episodes to get into, but after that, Code Geass is incredibly addict and hard to stop watching.
One of the best parts of Code Geass is how invested in the characters and plot I was during the series. During certain points of the series, I was on the edge-of-seat dying to know what is going to happen next. There are other times where I was thinking how is he going to get out of a situation, and then I almost cheered when things went for the character. Other times the show can be very saddening in a good way. Shows where the main must use his wits to escape a situation is something I really like seeing.
Another important note is the that series can be quite dark and violent at times as it deals with themes of what the cost of freedom should be. and terrorism.
Fans of the other anime series, Death Note, will find a lot to like about Code Geass because there are a surprising amount of similarities despite the genre differences. Both shows are about a guy who gains great power and uses it to create the world that he desires. Lelouch is probably a more likeable character than Light from Death Note, although both are fantastic characters. Also there is a fantastic conflict between two friends that have different points of view. The only reason why I can see Death Note fans not enjoying the series is the art style of the animation. Unlike Death Note where it is more realistic, Code Geass is very stylized and intentionally unrealistic with the animation, but I think the animation looks amazing.
One more comparison is that while Death Note starts out better than it ends, with some incredibly gripping episodes in the early part of the season, then it begins to lose steam after a certain thing happened. On the other hand, Code Geass started a little slow and did not completely enthrall me until about episode 8 or 9, but consistently build towards better and better episodes. It would be nearly impossible for me to choose which series better between the two, but I have to give a slight edge to Code Geass after watching the almost as amazing season two.


While Code Geass is near flawless, there are a few negative aspects worth mentioning. First off, there is an unnecessary amount of random fan-service in a couple of episodes for no reason whatsoever. In general, the series focuses on the story and characters, but in a few episodes later in the series there are some things that it could have done without. That is the main reason why I could see female viewers not enjoying the series. Another minor flaw is the majorly annoying character Nina. She is a creep, and is often the worst aspect of any episode, fortunately however, her role in the series is very minor, only appearing in a few episodes. One last thing to mention is that there is a minor plot hole, which I cannot discuss in detail without spoiling the series, but it does not affect the series as a whole.

Note: Since this is part one of my review of the series, however below is my final verdict and part two will be coming soon where I go into detail about the different aspects of the series.

Overall: 9.9/10- Overall Code Geass hits the mark on so many levels, from the emotional to the fun action scenes, the series is nearly perfect. Code Geass is an amazing series that any mature fan of animation should most definitely watch, and one of my new favorite TV series of all-time. Seriously, watch Code Geass below, it is amazing!

If the video below does not work, watch the series at this link.


Recommended for: Sci-Fi fans, Action fans, Mecha fans, Thriller fans, Death Note fans,
Note: If any of the episodes do not work, please contact me and I shall find ones that work. 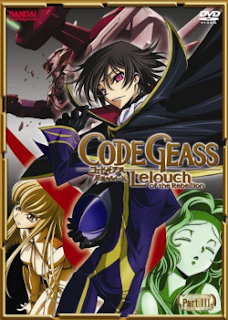 Posted by James the Reviewer at 7:33 AM