Thoughts: Terminator 2: Judgment Day the sequel to The Terminator. directed by James Cameron and staring Arnold Schwarzenegger, Linda Hamilton and Edward Furlong. Recently I re-watch Terminator 2 for the first time since I was a kid and all that I can say is wow! It was a lot better than I had originally remembered. Not only is it one of the action movies, it is one of the best movies I have seen in a long time.
While the first Terminator would be considered an action suspense thriller, Terminator 2 is much more of an awesome action movie, but it still contains some of the suspense that made the original great. This is the perfect example on how to make a sequel, it is better in every way than the original. The action, story, characters, effects, acting, everything really is just better.


The Good: Incredible action scenes, Likable characters, Great story, Top notch performances, Revolutionary special effects, One of the best movie villains, Has a message, One of the best action movies ever made, Good use of humor, Great soundtrack,


Warning: This movie is rated "R" for violence and other mature content.


Plot: The following plot summary is copied from Wikipedia.com.
In 1995, eleven years after the events of The Terminator, John Connor (Edward Furlong) is ten years old and living in Los Angeles with foster parents. His mother Sarah Connor (Linda Hamilton) had been preparing him throughout his childhood for his future role as the leader of the human Resistance against Skynet, but was arrested after attempting to bomb a computer factory and remanded to a hospital for the criminally insane under the supervision of Dr. Silberman (Earl Boen). Skynet sends a new Terminator, a T-1000 (Robert Patrick), back in time to kill John. A prototype which is more advanced than the Terminator sent after Sarah, the T-1000 is composed of a "mimetic poly-alloy", a liquid metal that allows it to take the shape and appearance of anyone or anything it touches. Though it cannot mimic complex machines such as guns or bombs, it can shape parts of itself into knives and stabbing weapons and can mimic the voice and appearance of humans. It assumes the identity of a police officer and goes in pursuit of John. Meanwhile, the future John Connor has sent back a reprogrammed T-800 Terminator (Arnold Schwarzenegger) to protect his younger self.
The Terminator and the T-1000 converge on John in a shopping mall, and a chase ensues in which John and the Terminator escape by motorcycle. Fearing that the T-1000 will kill Sarah in order to get to him, John orders the Terminator to help free her. They encounter Sarah in the midst of her own escape attempt. She is initially terrified by the Terminator but accepts its assistance after it helps them to escape the T-1000. The Terminator informs John and Sarah about Skynet, the artificial intelligence that will initiate a nuclear war on "Judgment Day" and go on to create the machines that will hunt the remnants of humanity. Sarah learns that the man most directly responsible for Skynet's creation is Miles Dyson (Joe Morton), a Cyberdyne Systems engineer working on a revolutionary new microprocessor that will form the basis for Skynet.
Watch the movie to see what happens next.


Plot: 9.5/10- While it may be an action movie, the story never forgets its characters and gives them depth. Plus, the plot is smart and perfectly paced.

Action: 9.9/10- Terminator 2 has some of the best action scenes ever filmed. Cameron's direction is spot on, there are a lot of fantastic stunt work, which makes the action scene so much more believe than many filmed today. The filming of every scene is masterfully lighted and framed without any use of the terrible shakey-cam method, which far too many "film makers" currently use.

Acting: 9.2/10- Linda Hamilton much improved her performance from the last film and really developed into a great character. Edward Furlong as John Connor is not the usual annoying kid character that almost always happens in movies. He is likeable and mostly well acted. Arnold Schwarzenegger is usually not a good actor, but this is the perfect role for him. Robert Patrick giving a very menacing performance, one of the best film characters of the 90s.


Special effects: 10/10- Although the computer generated effects were revolutionary at the time, there are never over used and reserved mostly for the iconic T-1000 character. While the film is more than 20 years old, the effects hold very well today. The film using many practical effects during the action scenes, which are far more effective than any form of CGI.


Soundtrack: 9.3/10- It uses a variation of the original soundtrack and it worked brilliantly.

Comedy: 7.3/10- There was a surprising amount of humor in the movie and it all works well.

Would I Watch This Again: Definitely, so many great scenes, a very re-watchable film.


Overall: 9.6/10- Overall Terminator 2: Judgment Day is a fantastic, near perfect action film with a smart plot and characters that you actually care about.


Closing comments: Terminator is an absolute must see action movie, the action is amazing, the plot and well written. 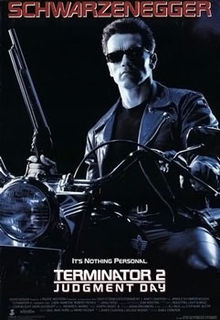