Thoughts: As I have said before, I was really anticipating The Amazing Spider-Man. After the early reviews my expectations were a little low but after watching The Amazing Spider-Man, it far exceeded my expectations. It was truly "Amazing" (no pun intended), it is not only my new favorite Spider-Man movie, which I really did not expect, it was one of my favorite comic book movies in general. You know the feeling you get when your favorite book is adapted to a movie and the movie is even better than the book, that is what I am feeling right now.
The Amazing Spider-Man perfectly captures Spider-Man's character from the comics. His powers are all comic book accurate and he says his famous witty quips during combat. Also Andrew Garfield was the best Peter Parker, he is a very real and believable character with very human flaws. Early on in the movie, it made it clear that Peter was very smart just like the comics. His on-screen chemistry with Emma Stone was so natural and believable in every scene of the movie. When he wears the Spider-Man costume, he looks and acts just like the Spider-Man from the comics and fights with a more nimble style than the previous Spider-Man.
The Amazing Spider-Man started a little slow with not a lot of action in the beginning, but the drama was so well made and the actors so convincing it did not feel slow to me. I was completely invested in the movie after the first 10 minutes of the movie. But after Spider-Man gets his powers, the movie picks up with some excellent action set pieces. There is a surprising amount of particle effects and stunt work that make the action seem very real. The darker tone to the movie worked surprisingly well for Spider-Man and the movie featured more violence than I expected from a Spider-Man movie, which worked very well for the movie.
The only two minor flaws I found with the movie were Doctor Conner's evil plan and that the trailers were a little misleading. The Lizard was not as good of a villain as the Green Goblin or Doctor Octopus. Also the marketing for the movie could have been better, the trailer gave away a little too much of the plot but I avoided most of the trailers for the last 2 months and I would recommend not watching all of the trailers. After reading another review, it was pointed out that some of the trailers featured clips that were not in the movie, which did not bother me because I did not watch the trailer.
One of the main complaints about the movie from other reviews is that it was too similar to the original but that is kind of a dumb argument. Because changing the origin would be like giving Batman guns and make him start killing people, he would not be the same character.


I am not posting the trailer because it spoils too much of the movie.


Plot: The following plot summery is copied from Wikipedia.com.
A young Peter Parker discovers his father Richard's study has been broken into. Gathering up hidden documents, Peter's parents take him to the home of his Aunt May and Uncle Ben, then mysteriously depart. Years later, a teenaged Peter attends Midtown Science High School, where he is bullied by Flash Thompson and has caught the eye of Gwen Stacy. At home, Peter finds Richard's papers and learns his father worked with fellow scientist Dr. Curt Connors at OsCorp. Faking his way into OsCorp as one of a group of high-school interns, Peter sneaks into a lab where a "biocable" is being created from genetically modified spiders, one of which bites him. On the subway ride home, he is shocked to find strange spider-like abilities manifesting.
After studying Richard's papers, Peter visits the one-armed Connors, reveals he is Richard Parker's son, and gives Connors his father's "decay rate algorithm", the missing piece in Connors' experiments on regenerating limbs based on lizard DNA. Connors is being pressured by his superior, Dr. Ratha, to devise a cure for the dying, unseen head of OsCorp, Norman Osborn. Watch the movie to see what happens next.

Plot: 9.9/10- An even better retelling of the classic origin with some new twists. The tone of the movie was definitely darker and more violent, which I did not expect to work for a Spider-Man but Marc Webb pulled it off perfectly. There was one famous scene that is important to the Spider-Man story, if you have seen the previous movie you will know what I am talking about, that is did make the impact that the original did but was some surprisingly emotional parts and it was very inspirational. Also did not expect all of your questions explained in this movie, which is obviously going to be in the sequel.

Action: 9.4/10- Although the movie is not action packed, especially in the first 40 minutes. The action was choreographed so well and there was only one scene were the set lighting was a little too dark but you could clearly see what was happening.

Ifans was a good Dr. Connors.

Special effects: 9.6/10- There were only one or two short scenes were the effects did not look believable. The Lizard is one of the most realistic CGI characters I have seen, right up there with Hulk from The Avengers. Spider-Man looked very real when he was swinging through the city.

Soundtrack: 9.6/10- Although the soundtrack is not quite as good as the iconic Danny Elfman score, there are some excellent themes used in the movie. I wish that there was not as much licensed music used in the movie.

Comedy: 7.7/10- Just like the comics Spider-Man says his witty quips during battle, which was great to see. But most of the movie is very serious.

Would I Watch This Again: I want to go watch it again right now! I am definitely buying the Blu-Ray when it is released.

Overall: 9.8/10- Overall The Amazing Spider-Man is everything I wanted in a Spider-Man movie and more. It is truly does live up to its "Amazing" title.

Closing comments: Although most would not enjoy the movie as much as I did, I found The Amazing Spider-Man to be the perfect adaptation of Spider-Man and stay after the credits for an extra scene. 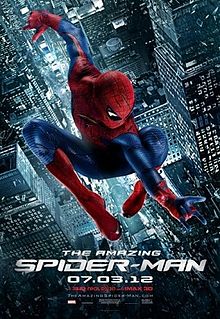 Posted by James the Reviewer at 8:22 AM