If you read my review for Fullmetal Alchemist: Brotherhood, you might be wondering why am I reviewing it again, but that is not the case. Today I am reviewing the original Fullmetal Alchemist series. While the setup may be similar, the end result is a significantly different story that is great in its own way.

First off, I am going to explain the differences between Brotherhood and the 2003 FMA (Fullmetal Alchemist). Back in 2001, FMA was a manga (comic book) by Hiromu Arakawa, and when it grew in popularity an anime series was produced. However, since manga is released relatively slow compared to anime, the anime series caught up to the manga, and therefore the anime producers were forced to depart from the manga storyline and craft an entirely different story from roughly the halfway point onwards, as well as adding a couple of filler episodes early on. On the other hand, FMA: Brotherhood is nearly a word for word, panel for panel adaptation of the manga, therefore the story is focused and never strays from the main storyline. 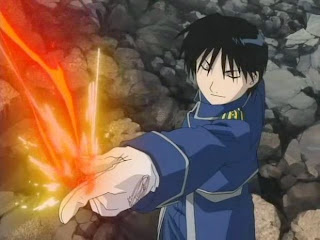 To put it briefly, FMA: Brotherhood is the better series; however, the original FMA is still fantastic because some of the changes it makes offers a different perspectives on the story and themes. If you want to have the most manga accurate experience, watch the first three episodes of Brotherhood and then watch episodes 5 and 9 of the original FMA, and then continue watching Brotherhood. However, watching either series in their entirety works just fine as a viewing experience.

Now that you know the difference the two FMA series, let the review begin.

Plot summary: Fullmetal Alchemist is a science fantasy epic about two brothers, Edward and Alphonse Elric that are Alchemists, who tried to bring their mother back from the dead through human transmutation. However, something went wrong and Alphonse, Ed's younger brother, lost his entire body and Ed lost his leg. To save his brother, he transmuted his soul onto a suit of armor, but it cost Ed his arm to save his brother. At first, the series seems to be only about the brothers trying to get their bodies back, but it is so much more than that.

Plot: 9.6/10- Fullmetal Alchemist is a series with a lot of strong themes throughout its story. While not as large scale and epic as Brotherhood, FMA's story is a more personal and tragic narrative, which works well in its own way. After two episodes that serve as an introduction to the characters, the series jumps back in time to tell the story of how the brothers lost their bodies when they were children, and their journey to become State Alchemists, which refers to the alchemists that serve the military in exchange for funding and resources.

In the flashback episodes, the story switches to a somewhat episodic nature with a "threat of the week" type stories. Fortunately, each story fleshes out the characters and the world, while also effectively conveying strong thematic elements. Around episode 14, when the characters and world are established, the plot becomes more focused and serialized, which is good. One of my problems with the plot in general is that when the series departs from the manga, it seems to lose steam and focus, with the next few episodes meandering a little too much, granted the plot is still better than almost any other shounen series. The other problem is that the story introduces a few elements into the story in the last three episodes that do not mesh well with what was previously setup, and the finale leaves the viewer dissatisfied. Fortunately, the Conqueror of Shamballa feature film gives proper closure, and since it is such an integral part of the story, it is included in my overall opinion of the series.

Characterization: 9.7/10- Edward and Alphonse Elric are two of most well developed characters in any anime. Having already seen Brotherhood, I was already attached to these characters, and FMA gave me more time with these characters. Just like Brotherhood, their brotherly bond is executed believably. What fascinates me is how the original creator of the manga, Hiromu Arakawa, was able to craft such a believable and accurate representation of brothers, yet she is a woman. I am not saying that women cannot write characters like this, to the contrary, she was able to write characters that are relatable to someone, like myself, who has a strong bond with his brother, and that is quite an impressive feat. No other work of fiction has captured it so well, regardless of which version of FMA you are comparing it to.
As for the other characters, The Homunculi seem to have more characterization and focus than Brotherhood due to the alteration of their origin, which added an extra layer of tragedy and drama, even if it did not mesh as well into the plot as Brotherhood. In general, the Homunculi are fantastic villains! Each one except for Gluttony is well developed.

My favorite aspect of the original FMA is how the series handled the backstory of the Homunculus Lust. In Brotherhood, Lust was one of my favorite characters, yet her screen time was shorter than I would have liked. In FMA however, Lust is even given an entire episode devoted to her character, and the direction the writers go with the character is fantastic. Scar is another antagonist of the series, and, just like Brotherhood, his character is superbly developed and given motivation. The only problem with the characterization in FMA is that many of the side characters not mentioned here, with the exception of Mustang, are left with little development. However, it is not a huge problem since the lack of development is only noticeable in comparison to Brotherhood.

Action: 8.3/10- For a shounen, Fullmetal Alchemist is not particularly action heavy, and, for me, that is more of a plus than a negative because it focuses on the story and characters. That being said, the action scenes that are present are quite good. Alchemy in FMA's universe is one of the coolest powers ever, and it allows for some unique battles that use strategy and chemistry to defeat foes.
Acting: 9.3/10- Just like my issue with the Japanese dub in Brotherhood, casting a woman, Romi Park, as Edward is distracting to me because I cannot stop thinking of the voice as a woman in a guy's body. However, since Edward does not age as much as he does in Brotherhood, it is not quite as noticeable. My general opinion about casting a woman as a male character is that if the character is 13-15 or older, cast a man in the role, otherwise it is distracting to me.
Due to this and the fact the canonical language of the FMA is English, I much prefer the English dub, but if you prefer the Japanese that is perfectly fine. As for the dub itself, while it does have some weak points early in the series, the main cast is superb, especially later in the series. Vic Mignogna is absolutely perfect as Edward, and same goes for Travis Willingham as Mustang. Unlike either series in either dub, the voice actor for Alphonse is actually a 12 year old boy. Considering that his performance as Al was excellent, the added layer of believability was greatly appreciated. In fact, I prefer him to Maxey Whitehead in Brotherhood.

Art Style: 8.5/10- Considering that the series is more than a decade old, the animation holds up rather well. At times it shows it age, but thanks to the style of animation that mimics the manga, it can maintain a mostly constant quality throughout.

Soundtrack: 7.7/10- FMA's score fits the tone of whatever scene it is used, but many of the tracks are reused almost too frequently.

Humor: 8.6/10- Unlike Brotherhood, FMA does not have quite the perfect balance of drama and humor. That being said, the short jokes about Ed are always funny, and there is still some good physical comedy.

Opening and Ending: 8.2/10- FMA's first two openings, particular the second, "Ready Steady Go!," are fun, fast paced, and well animated. On the other hand, the endings and other openings are almost entirely forgettable and not worth listening to more than a few times.

Non-Otaku Appeal: If you want to see a science fantasy epic that uses some classic anime tropes but still has a serious plot, either Fullmetal Alchemist series will certainly suffice. However, I would say that Brotherhood is easier to get into rather the original FMA for newcomers.

Entertainment Value: 9.4/10- Even though the series lost my attention for a couple of episodes during the middle section of the series, it rarely ceased to entertain, even when I was watching almost word for word adaptation of the scenes that I have already seen in Brotherhood.

Closing comments: Fullmetal Alchemist as a franchise including both series is my favorite anime ever, and easily one of my favorite franchises as whole. Everything from the core brotherly bonds to the epic story appeals to me.