Scott Pilgrim vs. the World Review

Scott Pilgrim vs. the World combines three of my favorite things, video games, comic books, and anime into one quirky, entertaining, and stylist live-action package. 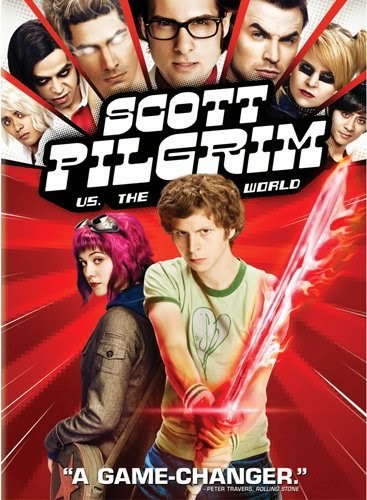 After failing at the box office, Scott Pilgrim vs. the World became a cult classic of sorts. It is the type of film that is designed to appeal to specific audience members, and if you are not a part of that group, you will likely not find the movie particularly entertaining. If, however, you are a part of the intended audience, you will likely find a lot to enjoy.
The film is directed by the popular Edgar Wright, who is most notable for making the Cornetto trilogy (Shaun of the Dead, Hot Fuzz, and The World's End), and his fast editing and directorial style is presence throughout Scott Pilgrim. Scott Pilgrim vs. the World is also based on the comic book, Scott Pilgrim, and just like the comic book, the movie contains many references and the visual choices that resemble video games, anime, and manga. For example, when someone dies, they explode into coins and points pop-up where they die just like a video game, and that is just the beginning. There are tons of visual and even plot points that mimic video games, and if you expect to take the movie seriously or for it to explain why all of these people have crazy powers, then you will disappointed. The original comic book was written by a Canadian, but took a lot visual cues from manga (Japanese comics) and anime, which is evident throughout the film. At one point during the movie, one of the characters' faces turns into an anime type face, which was hilarious!
Directed by: Edgar Wright
Genre: Action, Action Comedy,
Release Date: August 13, 2010
Running Time: 112 minutes
MMPA rating: PG-13

The Bad: One incredibly annoying character, Occasionally too corny for its own good,

Plot: The following plot summary is copied from Wikipedia.com.
In Toronto, 22-year-old Scott Pilgrim, the bass guitarist for the band "Sex Bob-omb", begins dating high schooler Knives Chau, much to the disapproval of his friends. Soon, Scott meets an American girl, Ramona Flowers. Ramona begins appearing in Scott's dreams, and he becomes obsessed with Ramona, losing interest in Knives. While playing in a battle of the bands sponsored by one "G-Man Graves" for a record deal, Scott is attacked by Matthew Patel, who introduces himself as the first of Ramona's "evil exes". Scott defeats Patel and learns that, in order for them to date, he must defeat all seven of her evil exes.
Watch the movie to see what happens next.

Plot: 7.9/10- Scott Pilgrim vs. the World's plot plays out much like an old video game with Scott having to defeat Ramona's seven evil exes, which makes the plot somewhat simple, yet that is also the appeal. Plot points follow elements of video games and even anime to a lesser degree. While not as apparent to me as it was for others, there are some metaphors about dating, and it almost makes fun of it to a certain degree. It seems as though the romance in the movie is more parody than anything believable, which works to the movie’s advantage in the end.

Characterization: 7.9/10- For the most part, Scott Pilgrim vs. the World's characters are fun and cartoony in the best way possible with one exception. Scott Pilgrim is timid and almost a wimp in many respects on the outside. However, he is a competent fighter, and from what is revealed from his past, he is not a complete social failure, as his stereotypical “nerd” appearance might suggest, which makes for an interesting juxtaposition. Ramona Flowers is the girl that Scott falls for, and she is mostly a good character, although her tsundere traits might annoy some viewers. Wallace Wells, Scott's friend, is the most annoying and worst character in the movie; he almost ruins the movie.

Action: 8.8/10- Surprisingly, the fight scenes in the movie have a lot of strong choreography and anime style action. From the insanely cool weapons to the hand-to-hand fights, there is not a single frame of shaky-cam. Also, the fight scenes, just like the movie, ooze with flashy video game/anime style.

Acting: 7.5/10- Some members of the cast in Scott Pilgrim vs. the World seem to be intentionally overacting, especially the Evil Exes. Sometimes the overacting works brilliantly like Chris Evans and Brandon Routh as two of the Evil Exes, while, at other times, it feels a little too corny.

Having not seen Michael Cera in any other film prior to watching Scott Pilgrim, I cannot fault him for playing the same role again, because I have no frame of reference. As Scott Pilgrim, Cera does a good job with the wimpy aspects of the character. Mary Elizabeth Winstead nails the tsundere character type, although she can be a tad grating at times. Ellen Wong as Knives Chau is a ton of fun in her role, and having Anna Kendrick in a minor role as Scott's sister is never a bad thing. Also, Aubrey Plaza is excellent as always in a role that perfectly suits her style.

Special effects: 9.5/10- Not only are the special effects surprisingly good, Edgar Wright's direction is superb! His quick cuts and generally fast editing is absolutely perfect. The use of on screen text and comic book like "Bang" and "Pow" visual aids are often humorous and add to the video game/manga aesthetic. Some of the special effects seem to be intentionally absurd, and it usually works.

Soundtrack: 8.1/10- While I am no fan of punk rock, the songs used in the movie are actually quite good. The score by Nigel Godrich nails the video game feel with a lot of 16-bit electronic sounds.

Humor: 8.8/10- Even though it is not entirely a comedy, Edgar Wright's tongue-in-cheek and satirical wit and humor is absolutely perfect for the movie. If you get the references to video games and other geeky tropes, you will find a lot of humor to enjoy.

Entertainment Value: 8.8/10- A few parts of the movie were a little too corny for its own good, which took me out of the movie, and Wallace annoyed me to no end, but for the majority of the film, I was most certainly entertained.

Overall: 8.6/10- Overall, Scott Pilgrim vs. the World is a fun, stylistic, and insanely unique movie with a style all its own. While it has its flaws and does not always hit the mark, it is yet another stellar movie by Edgar Wright, too bad it failed at the box office.

Closing comments: Scott Pilgrim vs. the World is the type of movie that is made for a very specific audience, and if you are not a part of said audience, then you will not find much to enjoy. On the other hand, if you do like video games, anime, comic books, and Edgar Wright, you are sure to at least enjoy the movie and its quirky humor and stylistic direction.

Posted by James the Reviewer at 6:46 AM