Here is part two of my Fullmetal Alchemist: Brotherhood Review, please comment below and let me know if you have seen the series or are interest in watching it. If you have not read part one, you can click here.

Plot: 9.9/10- In general, the biggest difference between a series like FMA: Brotherhood and another one of my favorites, like Death Note or Fate/Zero, is Brotherhood's lighter tone, while also maintaining a serious side. It is just more fun as a whole. 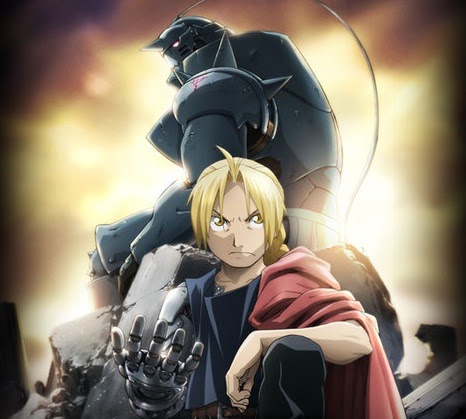 Even though the series is mostly serious in its overall themes and story, there is a lot of great humor, drama, and unexpected deaths. The tone of the series is one of the most unique things about it since it is never too dark, nor it is too light. At first, the show starts out fun, action-packed, and somewhat violent, but then episode 4 hits, it demonstrates the series’ ability to have a very dark side when necessary. However, the series' overall tone is somewhat similar to American TV’s mix of humor, action, and drama, although Brotherhood balances those aspects better most other series. Brotherhood's first half the brothers’, Ed and Al, quest to discover a way get their bodies back, but the second half is more like a rebellion, which reminded me of Star Wars, that results in an all out war. There are elements of political intrigue, an overly controlling government, and many other elements from various genres, which results in a series that is unique and original. My only real compliant with the plot is that the ending went into the weird territory a little too much, but only for half an episode, and the ending in general is one of the more satisfying ones to date.

Characterization: 10/10- FMA: Brotherhood has some of the best and most compelling characters from any series. 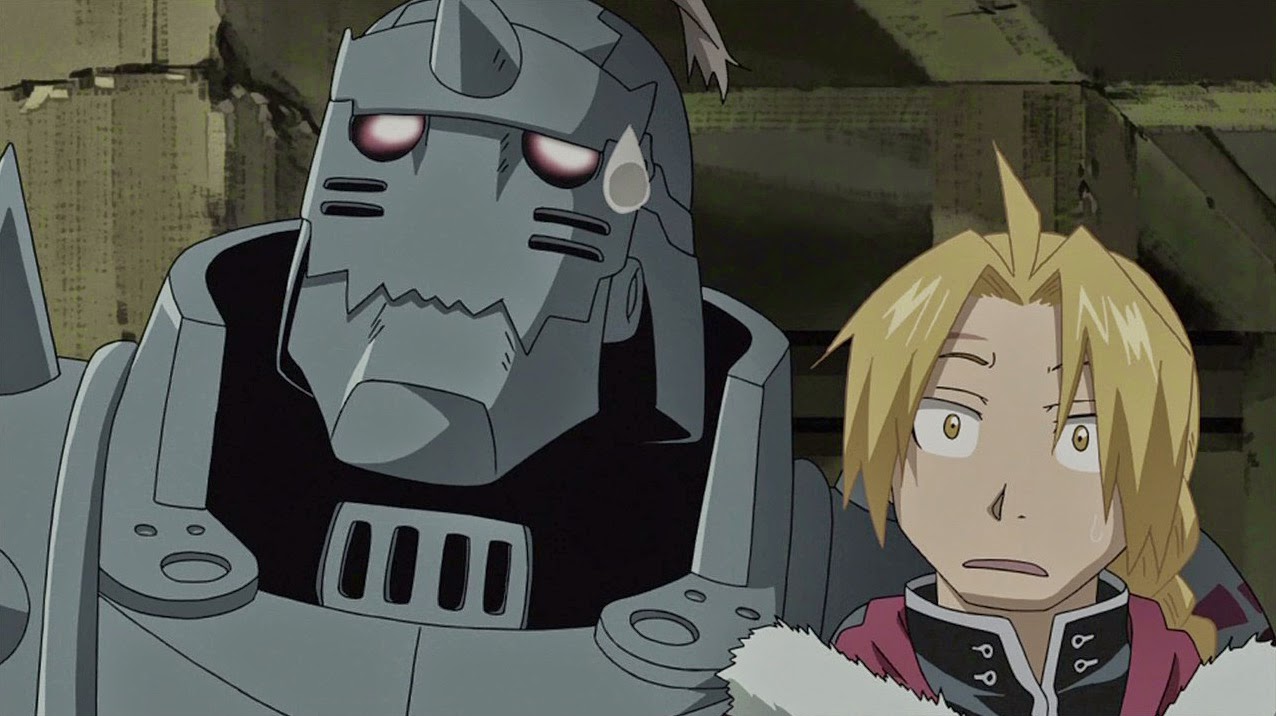 Edward and Alphonse Elric: Not only are the two leads, Edward and Alphonse, the best representation of brothers in any work of fiction, almost all of the side characters are well developed and memorable, and there are a lot of side characters. The brother relationship between Edward and Alphonse Elric shows a very realistic and relatable brotherly bond. Even though brothers might have their disagreements, in the end we always have each other's back no matter what and that is exactly how Edward and Alphonse are characterized. Typically, brothers in fiction almost always conflict with each other or have troubled relationships, but Ed and Al are a refreshing take on siblings, and they are easily the best. As individuals both have excellent character traits that often result in some hilariously comical moments as well as serious ones.
Roy Mustang: Colonel Roy Mustang is quite possibly the most bada** character ever. He has an absurd amount of epically cool scenes throughout the entity of the series yet, he also has great character development and shows a more comical side on occasion.

Winry: Winry is one of the better romantic interests in anime because she is neither the clichéd butt-kicking chick nor is she a damsel in distress. She is a smart and very skill automail (mechanical arms and legs to replace lost limbs) mechanic that helps Ed and Al, albeit not usually in combat.

Something else FMA: Brother does well are the villains, and there are many menacing villains throughout the series. My favorite of the villains is the character named Lust, and while she does not receive the most screen time, she is a compelling antagonist. However, discussing the villains in detail would spoil the surprise.

There are far too many characters like Armstrong, Riza Hawkeye, and Hughes to discuss in one review, but be assured that if I made a Top 25 anime characters list, there would be a lot of FMA: Brotherhood characters. Also, since the series is longer than the typical anime, there is ample room for character development and the series uses it effectively.
Action: 10/10- Few other animated series out there matches FMA: Brotherhood's quality of action scenes (only Black Lagoon and Attack on Titan).

Seriously, the last quarter of the series is essentially one epic battle, and it is amazing. The use of alchemy and a complete disregard for physics allows for some insanely awesome battles throughout and the animation during those scenes hold up incredibly well. Not only is the quality of action impressive, the variety is even more impressive since the battles range from epic alchemy battles to large scale military assaults to skillful hand-to-hand combat. Also, it should be noted that while the series is not overly gory, there is a lot of blood and death throughout.

Acting: 9.9/10- While there is not a lot wrong the Japanese dub, I do have one big problem that distracts me, Edward's voice. Edward is voiced by Romi Park, a woman.
Women voicing young male characters is not uncommon in all animation voice acting (Alphonse is voiced by a woman in both the dub and sub), but when Edward is 15-18 years old throughout the series, it more obvious that a woman is the voicing the role, and I cannot get past that fact. On the dub side, Vic Mignogna manages to sound like a teenage boy. If you did not mind Park's performance, that's great, but it was difficult for me not to notice. Granted, I pay more attention to voicing acting than most. That being said, the English dub is positively fantastic! It is easily one of the best dubs out there. It perfectly captures the over-the-top nature of characters, as well as the more dramatic scenes. Vic Mignogna and Maxey Whitehead voice Ed and Al perfectly giving the characters depth, yet showing their naivety. Travis Willingham should be given special praise for his portrayal of Roy Mustang. All of the other English dub actors are also top notch and essentially perfect. Also, another reason I prefer the dub is that the canonical language of the universe if English, so it makes sense.

Art Style: 9.8/10- Since FMA: Brotherhood was the first true shonen that I watched, the slightly odd art style was off putting at first because the animations changes to a style like the gif below for comedic effect. However, after watching a few episodes and a lot of other somewhat similar series, those brief parts of the series were actually hilarious! The animation in the other parts of the series is often very fluid and detailed, particularly during the impressive action scenes. The character models are one of the stronger aspects of the series in terms of animation quality. While the somewhat blocky shape of the characters is different at first, it works perfectly for the series. In fact, most modern shounen series do not look nearly as crisp and consistent as studio Bones’ animation for Brotherhood.
Soundtrack: 8.3/10- Brotherhood's soundtrack is its only weaker element. While all of the tracks are very good and fitting for the situation in which they are used, very few specific tracks are especially memorable, with a few exceptions.

Humor: 9.9/10- As stated previous, FMA: Brotherhood can be a very serious show when it needs to be, but it can also be utterly hilarious!

Most episodes have at least one or two laugh-out-loud moments spread throughout thanks to the comedic chemistry between Ed and Al. Also most of the other characters in the series are also funny and add great humor. Brotherhood has the type of humor that adds to the overall quality of the show, rather than detracting from its story.
Opening and Ending: 9.7/10- FMA: Brotherhood changes the opening and ending themes often, and while all but the last opening is superb, none can top the first opening, "Again" by Yui. Two of the ending themes are memorable enough to listen on their own, and admittedly, I listen to first four openings and the fourth ending often.
Sound Design: 9.9/10- From Alphonse's voice actually sounding like it is coming a metal body with the echoing, to cool sound effect that the Alchemist's transmutations make, all of the sound effects in FMA: Brotherhood are top notch.

Non-Otaku Appeal: Despite my initial skepticism that Brotherhood is not the best gateway series, after actually testing said theory on a true Non-Otaku that I know personally, he ended up enjoying quite a lot. Therefore, my verdict is that non-Otaku should at least give it a watch to see what they think about the series.

Entertainment Value: 9.9/10- Rarely was I not entertained while watching Brotherhood; it is a ton of fun, but smart fun.
Overall: 9.9/10- Fullmetal Alchemist: Brotherhood is one of those series that combines a fun, sometimes, lighthearted tone, with an epic story, and lovable characters that results in one of the best works of fiction I have ever seen. While there are a few flaws in the series, they can be more easily overlooked due to the sheer amount of quality episodes that Brotherhood contains. Also, even though the epic story and humor is great, the characters and how well they are developed is what raises Brotherhood above the rest. In fact, FMA might just be my favorite anime of all-time.

Closing comments: Despite the length of my review, I have barely scratched the surface of what makes Fullmetal Alchemist: Brotherhood a classic and there are so many things that you can discover for yourself as to why it is one of the best. Also, if you are already an anime fan, Brotherhood or the original Fullmetal Alchemist is mandatory viewing.

Note: It should go without saying the FMA: Brotherhood is recommended for more mature audiences, however compared to other shows like Fate/Zero, Brotherhood is more in line with the majority of shows on network TV with mild profanity and violence that is mostly suitable for teenagers and maybe even younger.

Extra Recommendations: If you are a fan of the Avatar: The Last Airbender series, FMA: Brotherhood is highly recommended since it is somewhat similar in terms of the setting and Avatar was obviously influenced by Fullmetal Alchemist.
If you want to contact us or have any questions please send an e-mail to johnstarslayer@gmail.com.

Posted by James the Reviewer at 7:00 AM