The Godfather, a film that is often considered "The Greatest Film of All-Time." 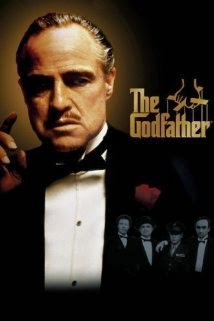 Reviewing The Godfather is a difficult task to accomplish. Since it is so highly regarded, even trying to subjectively critique the film and not praising it as the “best film of all-time” could result with some posh critics not taking me seriously anymore (not that any posh critics actually read this blog to my knowledge or that I honestly care what they think). Despite this, my review for The Godfather will not be bound by the preconceived notion that it is perfect and will not pandering to those that believe it to be perfect. This is my honest and unfiltered review.
Considering that other highly regarded works such as Goodfellas have turned out to be good but not great, my expectations for The Godfather were rightfully tempered. To my surprise however, The Godfather actually turned out to be a great movie. Despite the dark and heavy subject material and tone, the movie managed to be entertaining, which is an area where many similar crime films fail.

Compared to some other supposed "Classics," The Godfather is actually a movie that I can partially see why it is held in high regard. Does it really deserve to be considered "The Greatest Film of All-Time"? Not really, and now that I have said that, there is sure to be a wave of angry fans in a rage right now. It is certainly a great movie with fantastic performances, and if it is your favorite, that is great, but very few, if any, films should be considered "The Greatest Film of All-Time" because that is entirely up to personal preference. Are you any less of a film-lover if you do not enjoy, or even hate, The Godfather? Of course not! How much you love and enjoy movies is not dictated by which movies you enjoy, but rather how much you enjoy movies as a whole. Now that I am off my soapbox, allow me to continue with the review.

The Bad: Dragged a little bit in a few places,

Warning: This movie is "R" and is intended for mature audiences.

Plot Summary: Considering the popularity of The Godfather and the fact that most plot summaries spoil some of the best parts, there is no need for a plot summary.

Plot: 8.8/10- The Godfather's first 20-30 minutes are mostly setup the rest of the film by establishing the characters to a degree as well as the setting. One or two scenes during those first 20-30 minutes felt unnecessary and overly long. Fortunately however, the movie began to pick up the pace a little with a story that finally grabbed my attention by the 30 minute mark and after that, it was an entertaining experience. The plot took some unexpected twists and turns. During a few points in the movie, the pacing dragged a little too much, which took me out of the movie for a short time. Other than that, the plot was well written. Despite the long running time and occasional pacing issues, The Godfather did not feel like a long movie. Also, the planning to overthrow the other crime families and other such aspects were the most entertaining part of the movie to me. It should be stated that I do enjoy long movies more than the average moviegoer, therefore The Godfather is likely to bore some viewers more than me.

After doing a little research, it was stated that one of the reasons The Godfather was different than other Mafia and crime movies is that it did not depict illegal gambling and other forms of forms of racketeering in the film, and that the movie does not depict some of the characters as necessarily terrible people since most of the people they kill are other criminals, not innocent civilians. I have to agree with that statement since the main character is surprisingly likable and not too difficult to get behind. This is one of the aspects that make The Godfather more entertaining than the run-of-the-mill crime movie.

Acting: 9.3/10- Marlon Brando as Vito Corleone is undeniably iconic in the role. While occasionally difficult to understand, he plays the role to near perfection. A relative unknown at the time, Al Pacino also gives a strong performance as Michael Corleone. Robert Duvall is excellent as he always is in a somewhat minor role. Some of the other minor actors in the film, as well as few other cast members are not always the best, but overall, the acting by the minor characters is good.

Special effects: N/A- While not special effects per se, Francis Ford Coppola's direction is overall very strong, and he was able to create effective suspense in some scenes. However, to me at least, his direction was not revolutionary or noticeably amazing as some have said.

Soundtrack: 8.4/10- Nino Rota's score for The Godfather is fitting for what the film needed, and it added suspense to some scenes. After doing some research, I discovered that the movie was disqualified for Best Score at the Oscars because the "Love Theme" was used by Rota in a previous work.

Humor: N/A- Considering that The Godfather is such a serious film, many will not find any humor in the movie. However, some parts did make me laugh in a good sadistic kind of way, like when a character that you dislike finally gets what is coming to him.

Overall: 8.8/10- Despite being overrated to a degree, The Godfather is undeniably a well crafted piece of film with excellent performances and surprising entertainment value, providing the long running time is not a turn off.

Closing comments: Considering that The Godfather is so highly regarded by critics, I recommend the movie to anyone old enough that considers themselves a film enthusiast to watch the movie, even if one does not enjoy the experience. However, I am not one of those snobs that would say that you not are film enthusiast if you have not seen the movie, since there are many other movies that you should watch first.

Posted by James the Reviewer at 6:46 AM