From the creators of FLCL and Gurren Lagann comes Kill la Kill, a series loaded is absurd amount of hype with some even claiming is "the savior of anime." Does it live up to the insane hype? In many ways, it actually does.

Kill la Kill follows Ryuko Matoi as she attempts to avenge her father's death. However, she does not know exactly who killed her father, but only that the assailant has the second half of a giant scissor blade that has special powers. For a continued spoiler-free description of the plot, you can read my First Impression post by clicking here.

First off, Kill la Kill is insanely awesome at times. It is the type of series that can make me pumped up and excited, especially when amazing music kicks in. On the flipside, the series can be insanely dumb at times, but thankfully the series does not take itself too seriously during the dumber parts. However, when the series is more serious, it is at its best with some surprisingly likable characters that you really begin to care about, as well as some unexpected twists.

Kill la Kill comes from studio Trigger as their first full anime series. Considering that this is a freshman effort, it is a rather impressive one at that. Trigger is comprised of animators from Studio Gainax, who is responsible for classics such as the aforementioned Gurren Lagann and FLCL, as well as Neon Genesis Evangelion (my review here). Also, the director of Kill la Kill, Hiroyuki Imaishi, directed both Gurren Lagann and FLCL. While I had not seen Gurren Lagann at the time of watching Kill la Kill (I have just finished it), I did watch FLCL (aka Fooly Cooly) not long before watching Kill la Kill, and it certainly prepared me for the absurd weirdness and insanity to the point that Kill la Kill rarely phased me in the craziness department, although many viewers would certainly be off-put by the series.

The Bad: Inconsistent animation, Absurd amount of fanservice, Sometimes too dumb and ridiculous, A few annoying moments early on, Middle-section falters some,

Plot: 7.2/10- Kill la Kill's plot ranges from utterly stupid to insanely fun to surprisingly smart (on a few occasions). However, from what I understand, it takes many cues from Gurren Lagann (I haven’t gotten that into it yet). Many parts of Kill la Kill parody other anime in a very self aware manor. It is technically set in highschool, and it almost makes fun of this fact since very little about the story feels like it is set in highschool or needs to be, which is good. Much of the series is like that of a shounen except without being childish like a shounen due to the mature themes that are not suitable for a younger audience.

Early on, the series is very lighthearted and non-serious, but it becomes darker and more serious as the plot progresses while still maintaining its fun and entertaining feel. In fact, the last quarter of the series is the best part, since the middle portion begins to meander a little too much. There are some interesting plot twists and turns that are mostly unexpected. The big explanation of how and why the Goku uniforms have special powers is explained with typical anime BS in a such a way that I believe it was more parody than anything. Also, the series does throw around some interesting and humorous metaphors, some of which are interesting and fun, while others miss the mark. In addition to the metaphors, there is some thematic depth that some will argue is there, while others will write it off as stupidity.

Ryuko Matoi: Ryuko is the main protagonist of the story. She has some clichéd shounen qualities, but ultimately comes off as cool and bada** most of the time.
Senketsu: Senketsu is actually Ryuko's sailor uniform that gives her superhuman abilities, but he actually has a personality and develops a friendship with Ryuko, which is the best aspect of his character.
Mako Mankanshoku: Mako is the comic relief character, and she has to be one of the best comic relief characters I have ever seen. As any Star Wars fan knows, comic relief characters can go horribly wrong (Jar Jar), almost to the point of ruining a work of fiction, but Mako only adds to it. In fact, she might be my favorite character from the series! She is so much fun to watch in all of her comedic insanity.
Satsuki Kiryuin: Satsuki is the main antagonist of the series, and as a character, she is easily one of the best parts of the series. She is a menacing villain and leader of her forces. At first, she seems rather onenote, but without spoiling any, she turns into a great character by the end.

Action: 9.5/10- The action is one of the best parts of Kill la Kill. It is really freaking awesome most of the time. While it can be a little slideshow-ish with some unnecessary still frames, for the most part, the action is thrilling! During many of the action scenes, I got a real rush of excitement. 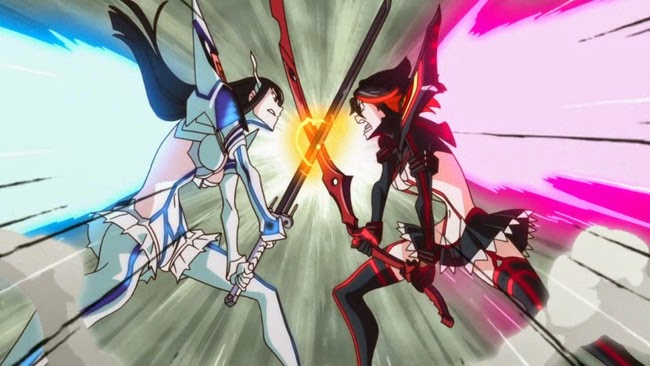 Acting: 8.3/10- Kill la Kill has no English dub as of now being that it has just finished airing, but the Japanese cast is very strong, and I doubt that any English cast can give the proper insane feel to the series.

Art Style: 8.1/10- Kill la Kill's animation is somewhat inconsistent, but overall very well done. Due to how stylized and unrealistic the art-style was, it took a couple of episodes before I really started liking it, but in the end, I liked it a lot. Despite some parts being a little low quality, they rarely stand out due to the wacky nature of the series. Also, there is some unnecessary 3D animation mixed with the 2D. Since there is no better place than the animation to discuss it, let's talk about the fanservice. Wow, Kill la Kill is packed with fanservice. It is not the worst ever since the detailing of the body is very rudimentary, but from Ryuko's impractical outfit to a couple of disturbingly odd scenes, the fanservice runs rampant in the series. Unlike a lot of fanservice however, the series does justify it to a degree with some plot points trying to explain it, and the characters are actually self-aware of it, with Ryuko being embarrassed of her outfit several times. However, the fanservice is not all one sided with a surprising amount of female oriented fanservice. For me personally, the fanservice got to the point where I did not even notice after a while due to the shear amount of it, so it was not a major drawback for me. On the other hand, if you have any aversion to fanservice, Kill la Kill is not the series for you.

Soundtrack: 9.8/10- Kill la Kill's soundtrack is fantastic! The use of the score during key points of the series, particularly the action scenes, works to great effect in making the viewer pumped up and even inspired. "Blumenkranz" has to be one of the best villain themes in quite some time and the song "Don't Lose Your Way" never gets old, particularly the orchestral version that is used throughout the series. Also, each of the character themes is fantastic! In fact, the soundtrack deserves an entire post, which will be coming this weekend.

Humor: 9.1/10- Kill la Kill is probably the funniest action comedy that I have seen since Fullmetal Alchemist: Brotherhood and that is mostly thanks to Mako's comedic brilliance. Some of the comedy is hit or miss, particularly with Mako's family, but it made me laugh quite many times throughout the series.

Opening and Ending: 7.9/10- The first opening is opening nothing special, and first ending is quite good. On the other hand, the second opening, while not amazing, is very strong and worth listening on its own.

Non-Otaku Appeal: Unless you want to watch a great example of how crazy anime can be, this is not a good gateway series by any means.

Entertainment Value: 9.5/10- Kill la Kill rarely creased to entertain with its over-the-top fun style. I was almost never bored and often glued to the screen to see what insane thing was going to happen next to the likable characters.

Overall: 8.4/10- Kill la Kill takes the insanity of FLCL, the over-the-topness of Gurren Lagann, a lot of fanservice, and mixed it all together for one unique and entertaining ride. However, Kill la Kill is difficult to rate. Due to how dumb and clichéd the plot can be at points, actually saying that Kill la Kill is a "great" series is difficult, but thanks to the likable characters, shear entertainment value, and arguable amounts of depth, I have to say that I enjoyed it a lot, even if I can see why others might call it stupid.

Closing comments: While some might hate the series due to the hype and large fanbase, Kill la Kill gave me exactly what I was expecting from the series, as well as some unexpectedly strong characters.

Update Side Note: Since writing this review, I have finished Gurren Lagann, and its influence on Kill la Kill clearly evident. While Kill la Kill is great, Gurren Lagann is definitely my favorite between the two due to the last third of Gurren Lagann being possibly the most epic thing I have seen in anime and because of the superior emotional impact, which Kill la Kill was lacking in comparison.

Here are other reviews of Kill la Kill for alternate opinions:
Review by Crescent Reviews
Review by Meeping Anime
Review by Nigma Box