Since it is the 30th Anniversy of E.T. the Extra-Terrestrial, it seemed like a good time to post the review of the movie.

Thoughts: This might surprise some of my readers but this is the first time I have seen E.T. I usually do not like "family" movies, but I actually enjoyed E.T. a lot more than I thought I would. It was a very good movie that the even adults can enjoy, unlike many other family movies. Also E.T. the Extra-Terrestrial had some superb performances from the very young cast. Although it is not a comedy, some of the scenes in the movie were hilarious. The special effects used for E.T. are slightly dated but still very believable and hold up well enough today. There were also some great Star Wars references in E.T., which as a Star Wars fan I really liked. John Williams' brilliant score is one of his best and added depth to the scenes. I normally do not like movies that are considered "emotional journeys" since I never have any emotion of that kind about a movie other if it was entertaining or not, however I still enjoyed the movie even though I had no emotional attachment to the movie. Also I normally cannot stand movies that are considered "cute" but I still enjoyed E.T. because of the humor and good story.


Plot: The following plot summery is copied from Wikipedia.com.
The film opens in a California forest as a group of alien botanists collect flora samples. U.S. government agents appear on the scene and the aliens flee in their spaceship, mistakenly leaving one of their own behind. The scene shifts to a suburban home, where a boy named Elliott, age 10, is trying to hang out with his 16-year-old brother Michael and his friends. As he returns from picking up a pizza, Elliott discovers that something is hiding in their tool shed, which promptly flees. Despite his family's disbelief, Elliott lures the alien from the forest to his bedroom using a trail of Reese's Pieces candy. Before he goes to sleep, Elliott realizes the alien is imitating his movements.
Elliott feigns illness the next morning to stay home from school and play with the alien. Later that day Michael and their sister, 5-year-old Gertie, meet the alien. They decide to keep him hidden from their mother. When they ask it about its origin, the alien levitates several balls to represent its solar system and then demonstrates its powers by reviving a dead plant. Watch the movie to see what happens next.


Plot: 8.6/10- The plot is very original and has been replicated in other movies since the film's release. It was surprisingly enjoyable to watch.

Acting: 8.4/10- The movie has some of the best very young child acting I have seen in a movie. Steven Spielberg really knows how to direct children

Special effects: 8.0/10- Initially I watched the special edition version of the film, which added a GCI version of E.T. to the scenes that could not be made with animatronics at the time. The CGI effects are a little dated since it was remastered in 2002 but they were effective. Also I watched some of the original version of the movie that only had animatronics and puppets to use in the movie and the effects were mostly very well made.


Soundtrack: 9.8/10- One of John Williams' best scores, and one of my new favorite scores period. I could listen to it all day.

Comedy: 8.0/10- Although there is not constant humor in the movie, when there is humor, it is hilarious.


Would I Watch This Again: I will probably watch the movie again at some point.


Closing comments: E.T. the Extra-Terrestrial is a great movie and one of the best family movies ever made. 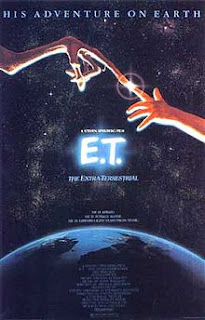