If you remember, Fate/Zero tied for my award for be best television series of the year, and in this review, I will explain why you should be watching it.

Fate/Zero is a critically acclaimed, contemporary fantasy series about the battle between magicians and their Servants, who are historical and legendary heroic figures from the past and mythology, for the ultimate wish granting device, The Holy Grail. While the premise is simple enough to explain, how the series executes this premise is more difficult to explain.

The series is not pure battle; the series is much more about the strategy the contestants use, the intense suspense that results because of it, and the clash of the character's desire for the Grail. In addition, Fate/Zero is about the ideals of the chivalric code that the heroes of old follow, and how far will you go for the greater good. In the world of Fate/Zero, the Grail chooses each contestant based on their motivations for obtaining it, which adds a unique complexity that few shows delve into. The motivations of characters in many works of fiction is often not explained or given much thought, which makes Fate/Zero special.
Of the series that I have seen, Fate/Zero is probably one of the ones that would appeal to a broader audience than most. It is void of the typical cliches that are found in the genre like fan-service, being set in high-school, and over-the-top animation. If you do not mind a dark story with violence, Fate/Zero is a must watch. If you are a fan of shows like Game of Thrones, or any mature fantasy series, then Fate/Zero is something that would likely pique your interest. Something to note however is that the first episode, which twice the length of normal episodes, is majorly exposition heavy as it attempts to explain the premise and set the foundation for the characters. After the first episode however, the pacing improves. Since Fate/Zero is a prequel to the Fate Stay Night series, some parts are confusing at first, however watching the Stay Night is not necessary, especially since I did not watch Fate Stay Night beforehand. Basically, just go with it for the first few episodes until things are made clear.
Aside from the intriguing ideals that Fate/Zero explores, the series has a lot of epic action and suspense, along with well developed characters. Fate/Zero does not have one central character; it revolves around the seven Masters and their seven Servants. Even though Arturia Pendragon, aka Saber, and her master Kiritsugu Emiya are given the most screen-time, they are not necessarily the protagonists. Almost all of the characters are well developed and many of the them have intriguing and often entertaining character traits. While one would assume the Masters are the best characters, the Servants and their respective outlooks on honor, kingship, and chivalry are one of the most fascinating aspect of the series. Since there are so many characters in the series, discussing each one, as I typically do in TV reviews, would take up most of the review. However, some of the historical/mythological figures that the series includes are King Arthur (with a twist to mythos), Alexander the Great, Lancelot, and Diarmuid Ua Duibhne.
My only problem with the series is that I did not feel as captivated by it, in that I did not feel as though I had to know what happened next like a series like Death Note, which had me on the edge of my seat. However, towards the later half of the series, I was much more involved in it.

The Bad: Anticlimactic ending, Exposition heavy first episode (not a problem for me but might be for others),

Plot: 9.6/10- Despite the early pacing issues, Fate/Zero's plot is full of great characters and plot twists. Some of the concepts presented are a little confusing during the first few episodes, but after enough is explained, the series becomes engaging and often intense. Occasionally, Fate/Zero can be a little dialogue heavy for some viewers, although I did not find that aspect a problem since the dialogue was interesting, but some might have that problem.

Action: 9.3/10- Fate/Zero combines exciting action with thoughtful strategy. Each Servant has a "Noble Phantasm" and that "Noble Phantasm" is a special power unique to each Servant that they can use to gain an advantage in combat. In addition, the Servants are very powerful and the battles that ensue are excellently animated. Also, the most of the Masters are powerful magicians and mage hunters, which results in some unique battles as well.

Acting: 9.5/10- Fate/Zero features a very strong English dub. Crispin Freeman gives the standout best performance, although that is not particularly unexpected since Freeman is one of the best voices actor in the business. Kari Wahlgren as Saber also gives an excellent performance and Matthew Mercer as Kiritsugu gives an equally fantastic performance. Jamieson Price as Rider is bombastic and hilarious, and I cannot imagine anyone else voicing the role any better than he did.

Art Style: 9.9/10- Fate/Zero's art style is somewhat unique, yet at the same time the animation style is rather subdued and realistic. The actually quality of animation is simply beautiful and stunning. You can take screencaps and frame them on your wall, they are that good. Ufotable is one of the animation studios in the business, and while nothing can match their previous work on the Kara no Kyoukai series, which I highly recommend, Fate/Zero's animation is overall amazing.

Soundtrack: 9.2/10- Two words: Yuki Kajiura. For those not familiar with Kajiura's work, she has composed the soundtrack for top series such as Sword Art Online Kara no Kyoukai. She is among the best in the business and, even though Fate/Zero is not her strongest work, it is very good. The tracks increase the epicness of the battles and add the right emotion for every scene.

Opening: 8.5/10- The first opening "Oath Sign" is very good, and the animation is fitting for the show. The second "To the Beginning" is almost as strong, however "Oath Sign" is my preferred opening to the series.

Humor: 7.9/10- Despite being a mostly serious series, Fate/Zero has quite a few moments of humor, which add needed levity. Most of the humor comes from bombastic Rider, aka Iskander, aka Alexander the Great. His character is a lot of fun to watch, particularly his opinions of modern society.

Overall: 9.5/10- Fate/Zero is among the best animated series I have seen. While the series can be confusing at times, the action is epic, the characters are well developed, and the animation is stunning.

Closing comments: Even though Fate/Zero is not for everyone, it is one of the few anime series that would appeal fans of darker fantasy stories and intelligent action shows.

I have to give a thanks to Arvin Saints at Anime and Book Messiah for recommending Fate/Zero. Be sure to check out his review of Fate/Zero, which you can read by clicking here. 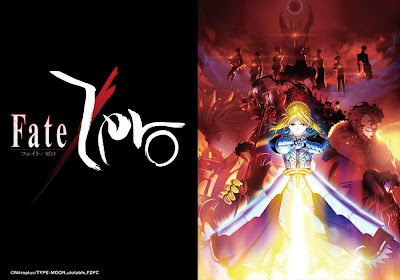 ﻿If you want to contact us or have any question please send an e-mail to johnstarslayer@gmail.com.

Posted by James the Reviewer at 5:59 AM