The Girl Who Leapt Through Time Review.

Thoughts: The Girl Who Leapt Through Time is an anime adaption of the 1967 novel of the same name. The Girl Who Leapt Through Time is a film that I happened to come across on several "Best Anime Movies" lists, and then I found it on YouTube and decided to give it a shot not knowing much about the film beyond the obvious time-travel element in the title. Was the film any good? Yes, most definitely yes; it is easily one of the best animated movies I have ever seen. Also, if you do not like anime, try not to think of the film as an "anime" since the art style is not over-the-top like many films or shows.
Directed by: Mamoru Hosoda
Genre: Sci-fi, Fantasy, Comedy, Time-Travel,
Release Date: July 15, 2006
Running Time: 98 minutes
MMPA rating: PG-13

Plot: The following plot summary is copied from Wikipedia.com.
Seventeen-year-old Makoto Konno (Riisa Naka/Emily Hirst) lives with her family in the Shitamachi area of Tokyo, Japan. Makoto lives with her parents and younger sibling Miyuki (Yuki Sekido/Shannon Chan-Kent). Her aunt Kazuko Yoshiyama (Sachie Hara/Saffron Henderson), is an art restorer at the Tokyo National Museum. One day, when Makoto discovers a message written on a blackboard at her high school, she inadvertently falls upon a mysterious, walnut-shaped object. On her way home, Makoto is ejected into a railroad crossing when the brakes on her bicycle fail and is struck by a train. She is transported a few minutes back in time to before the accident. Kazuko explains to Makoto that she has the power to "time-leap", to literally leap through time. At first, Makoto uses her power extravagantly to avoid being late, to get perfect grades on tests, and even relive a single karaoke session for an entire hour, but Makoto soon discovers that her actions can adversely affect others.
Watch the movie to see what happens next.


Plot: 9.8/10- The Girl Who Leapt Through Time is obviously about time-travel, however it is not a massive time traveling adventure along the lines of Doctor Who or Back to the Future. It is more about changing things that have happened relatively recently in the user's past and therefore alternate versions of themselves are not present. At first you might expected a fun romp, *Minor Spoiler* the plot takes several surprisingly dark turns later in the film. *End Spoiler* While the film does not delve that deeply into the mechanics of time-travel, the explanation is acceptable and works for what the film tries to accomplish, because time-travel is not the real focus of the plot; it is the led character Makoto Konno's life and how she uses her new found power for smaller things such as avoiding unwanted conversations and other trivial things. Actually, there are many times in everyday life where I wish I could go back in time just to change a small mistake I have made and The Girl Who Leapt Through Time really capitalizes on that concept and the relatability many audiences members have. Occasionally, the film focuses a little too much on the teen drama and romance, and one minor point is not explained as much I would have liked, but overall the plot is incredibly clever and smart.

Acting: 9.2- The Girl Who Leapt Through Time has one of the stronger English Dub casts I have heard. Emily Hirst does an excellent job as Makoto giving the character a certain likeability that made the character seem like a real person. As for the other members of the cast, there was not a single weak performance of the group.

Art Style: 9.6/10- While it is not the most detailed animation, Madhouse productions produced some of the most crisp and fluid animation to date. Except for a few parts, the animation is surprisingly restrained in terms of being unrealistic, which gives the film more believability.


Soundtrack: 8.4/10- Although some the songs that where used became a little annoying at times, they worked well to set the tone and emotional for the film. The score by Kiyoshi Yoshida is excellent, and it perfectly compliments the film's themes.

Comedy: 8.2/10- The Girl Who Leapt Through Time is a boarder line comedy featuring several hilarious scenes as well as a quirky sense of humor throughout. While you may not find yourself laughing through the entirety of the film, there is plenty to never make the audience bored. Some of the themes in the film reminded me of Groundhog Day, except darker.

Would I Watch This Again: Yes, The Girl Who Leapt Through Time will be a film that I re-watch several times.

Overall: 9.3/10- Overall The Girl Who Leapt Through Time is an original and fun time-travel movie with several surprising twists. Anyone interest in high-school (not usually my preferred genre) and time-travel need to give the film a viewing, even anime is not typically your thing.

Closing comments: Basically, what the film, below is the entire film uploaded on YouTube in good quality.

Warning: Although it is animated, the film is rated PG-13 and therefore not recommended for those under than age. 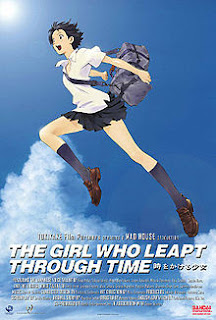 Email ThisBlogThis!Share to TwitterShare to FacebookShare to Pinterest
Labels: Anime, movie review, review, The Girl Who Leapt Through Time