Thoughts: Discovery Channel's Shark Week is upon us and it only seems right to review the film that made sharks even more terrifying, Steven Spielberg's Jaws.
*Cue Jaws music* Jaws is a pure classic of cinema, a film that needs no introduction, one of the must see films that almost everyone should at least watch once. The movie is based on the novel of the same name, and it is the film that launched Steven Spielberg's career. Jaws is a difficult film to review because, while it is fantastic, after you have seen it once, the suspense and tension are not nearly as effective as it is the first time you watch it. I first watched Jaws sometime between the ages 10 and 12, again when I was 15, and again more recently to review it. Although I was definitely not scarred by the film when I was a kid, I enjoyed the heck out it just like most who watched it as a kid, although it is certainly not a kid's movie. Despite still being a fun and mostly entertaining film, there is not a lot of suspense or thrills watching it again, however that should not deter you from watching the movie if you have not seen it, because it is an absolute must watch film. In general, I am a fan of the film, it is one of Spielberg's best and I have seen a few great documentaries about how it was made and the troubles Spielberg went through to get it made.

The Bad: Doesn't holdup as well on multiple viewings,


Plot: The following plot summary is copied from Wikipedia.com.
girl named Chrissie Watkins leaves a party on Massachusetts's Amity Island and goes skinny dipping. While swimming out near a buoy, she is seized by something from below; it thrashes her around and drags her down.
Chrissie is reported missing and her remains are later found on the beach by police chief Martin Brody. The medical examiner informs Brody that she was killed by a shark. Brody plans to close the beaches but is overruled by mayor Larry Vaughan, who fears that reports of a shark attack will ruin the summer tourist season, the town's primary source of income. The medical examiner consequently attributes the death to a boating accident. Brody reluctantly goes along with the explanation. The shark then kills a young boy swimming at the beach. His mother places a bounty on the shark, sparking an amateur shark-hunting frenzy and attracting the attention of local professional shark hunter Quint, who offers to kill the shark for $10,000. Marine biologist Matt Hooper examines Chrissie's remains and determines that she was killed by a shark, not a boat.
A large tiger shark is caught by fishermen, leading the townspeople to believe the problem is solved. Hooper asks to examine its stomach contents, but Vaughan refuses. That evening, Brody and Hooper secretly open the shark's stomach and discover that it does not contain human remains. They head out to sea to find the shark, but instead find the wreckage of a boat belonging to local fisherman Ben Gardner. Hooper explores the vessel underwater and discovers a sizable shark's tooth protruding from the damaged hull before he is startled by Gardner's corpse, causing him to drop the tooth. Without evidence, Vaughan refuses to close the beaches.
Watch the movie to see what happens next.


Plot: 8.6/10- Slow pacing is Jaws' only real problem. After a riveting and unforgettable opening scene, the first 45 minutes are all setup, albeit mostly effective setup, for the ultimate payoff of the thrills. The characters are mostly well developed and likeable, particularly my favorite character Captain Hooper. Due to some technical issues with the Jaws, Spielberg took a minimalistic approach to filming the scenes with the shark now aptly named the "Jaws Effect." The "Jaws Effect" is showing not showing all of the creature because nothing is more terrifying than the unknown.

Action: 6.0/10- Jaws is more of a suspense thriller than an action film, however there is a fight with the beast near the end of the film.

Acting: 8.1/10- Robert Shaw gives the standout best performance as the harden boat captain Hooper. His performance is especially great in his famous speech scene. Roy Scheider gives a solid performance as Martin Brody, the main protagonist of the film. Richard Dreyfuss offers some good humor in his role and gives an overall great performance. The other actors in the film are all good, although no others are noticeably better than the rest.

Special effects: 10/10- Due to the major technical issues the crew had with the shark, Spielberg was forced to only show parts of the shark throughout most of the film, which created the film's suspense. Originally, he intended the audience to see the entire shark as it ate the girl in the opening scene, fortunately that never happened and we now have one of the best films ever made from a technical standpoint.

Soundtrack: 10/10- I believe it was Spielberg who said something akin to "50% of the film's suspense was due to William's score" and that is not an exaggeration in the slightest. Similar to the soundtrack for Hitchcock's Psycho, Jaws' iconic theme builds suspense like no other film score and if it were not for his amazing score, the film would have been significantly less suspenseful. While everyone knows the classic Jaws' theme, Williams' composed several fun and rousing themes that are often overlooked, which evoke the high-seas-adventure atmosphere that some scenes have.


Comedy: 7.8/10- Dreyfuss' character had a few memorable comedic scenes, all of which worked well.

Would I Watch This Again: Obviously yes, however, as I stated before, it is not as entertaining on multiple viewings as many of my other favorite films are.

Overall: 8.7/10- Overall Jaws is a classic, a perfect example of revolutionary filmmaking and directing, a movie that everyone, film fans especially, need to watch.

Closing comments: While I do not hold it up as highly as others due to the lack of re-watchability, it's Jaws! What more needs to be said? Just watch it! 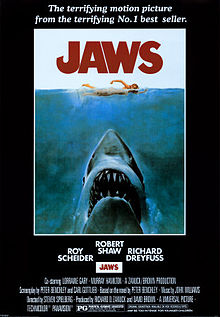 Posted by James the Reviewer at 6:21 AM