This was the first Alfred Hitchcock movie I have seen.


The Good: An interesting mystery, Shocking plot twists, Great use of suspense, Ahead of its time,  The famous crop duster scene was amazing for its time,


Plot: The following plot summery is copied from Wikipedia.com.
Roger Thornhill, a twice-divorced Madison Avenue advertising executive (Cary Grant), is mistaken for "George Kaplan" when he summons a hotel bellhop who is paging Kaplan, and is kidnapped by Valerian (Adam Williams) and Licht (Robert Ellenstein). The two take him to the house of Lester Townsend on Long Island. There he is interrogated by a man he assumes to be Townsend, but who is actually foreign spy Phillip Vandamm (James Mason). Thornhill repeatedly denies he is Kaplan, but Vandamm refuses to believe his men picked up the wrong man. He orders his right-hand man Leonard (Martin Landau) to get rid of him.
Thornhill is forced to drink bourbon in an attempt to stage a fatal road accident. However, he pushes one thug out of the car and drives off. After a perilous drive, he is arrested for drunk driving. He is unable to get the police, the judge, or even his mother (Jessie Royce Landis) to believe what happened to him, especially when a woman at Townsend's residence says he got drunk at her dinner party; she also remarks that Lester Townsend is a United Nations diplomat. Watch the movie to see what happens next.


Plot: 9.8/10- The mystery in the plot was not to hard figure out but not to easy and for the time it was original. and ahead of its time.


Action: 5.9/10- North by Northwest is not an action movie. It is a thriller but the famous crop duster scene was very good.

Acting: 8.0/10- Cary Grant performance was good and humorous and the other cast members were also good.


Soundtrack: 7.1/10- The soundtrack worked with the movie.


Overall: 9.4/10- Overall North by Northwest is a great mystery thriller with lots of plot twists.


Closing comments: This is the first Alfred Hitchcock movie that we have seen and many consider it his best. 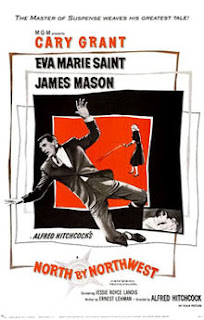 Posted by James the Reviewer at 7:58 AM