The Adventures of Robin Hood (1938) Review

Thought: We decided to watch "The Adventures of Robin Hood (1938)" yesterday, which we never seen before. We were not expecting munch. We were really surprised by how good it was. It wasn't campy and cheesey like most old movies were from the time.

The Good: Errol Flynn is the best Robin Hood, Lots of well choreographed sword fighting, Good acting, Great classic story, One of the best action adventure movies of all time, Best movie from the decade,

Plot: Richard the Lionheart, the King of England, is taken captive by Leopold of Austria while returning from the Crusades, his brother John (Claude Rains) takes power and proceeds to oppress the Saxon commoners. Prince John raises their taxes, supposedly to raise Richard's ransom, but in reality to secure his own position on the throne.
One man stands in his way, the Saxon Robin, Earl of Locksley (Errol Flynn). He acquires a loyal follower when he saves Much (Herbert Mundin) from being arrested by Sir Guy of Gisbourne (Basil Rathbone) for poaching one of the king's deer. Robin goes alone to see Prince John at Gisbourne's castle and announces to John's assembled supporters and a contemptuous Maid Marian (Olivia de Havilland) that he will do all in his power to oppose John and restore Richard to his rightful place. He then escapes, in spite of the efforts of John's men.
His lands and title now forfeit, Robin takes refuge in Sherwood Forest with his friend Will Scarlet (Patric Knowles). There they meet Little John (Alan Hale, Sr.), whom Robin recruits after a bruising quarterstaff bout. Other men join their growing band. Later, Robin provokes Friar Tuck (Eugene Pallette) into a swordfight, but then persuades the friar into joining him to provide spiritual guidance to the outlaws. Soon, Prince John and his Norman cronies find themselves harassed beyond all bearing with many of their troops receiving instant deadly retribution for their abuses courtesy of the Merry Men's arrows.
One day, Robin and his men capture a large party of Normans transporting taxes through Sherwood. Among Robin's "guests" are Gisbourne, the cowardly Sheriff of Nottingham (Melville Cooper), and Maid Marian. Robin and his men "liberate" the tax money, swearing to a man to contribute it towards King Richard's ransom. At first, Marian is disdainful of Robin and his "band of cut-throats", but becomes convinced of his good intentions. Eventually Robin lets the humiliated Gisbourne and sheriff go, telling them that they have Marian to thank for their lives. Watch the movie to see what happens next.

Action: 9.5/10- Surprisingly the action is better than a lot of movies today. The sword fight choreography was very good,


Acting: 9.1/10- Errol Flynn is the definitive, he looks the part and is the best I have seen.
Basil Rathbone as Sir Guy of Gisbourne was also very good.


Soundtrack: 7.8/10- While most old movie soundtracks are generic and not very good The Adventures of Robin Hood's soundtrack as good and original compared to other soundtrack of the era.


Overall: 9.1/10- Overall The Adventures of Robin Hood is one of our favorite old movie and it still holds up well today. 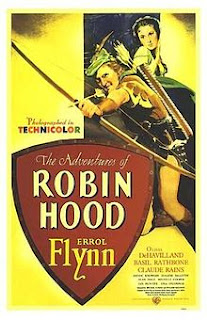 Posted by James the Reviewer at 7:12 AM