This is the review for Star Wars Episode I: The Phantom Menace requested by throughtwoblueeyes .


Just like the other Star Wars reviews this one is going to be little different than other reviews because we are super huge Star Wars fans so we can't write a critical review so if you don't like Star Wars you will hate this review.

The Star Wars prequels are not as good as the original but what could.

If you have seen the movie please give it any score from 1 to 10 (you can give a higher score than 10 because it is Star Wars).

The Good: Fourth best movie of all time, Anakin vs. Obi-Wan is one of the best fight scenes in movie history, Everything, Great cast, Special effects were great, Never a dull moment, Best soundtrack of all time,  Lots of other great things, We don't care what you say Hayden Christensen was good as Anakin, Anakin's part to the dark side was done perfectly from the  slaughtering of younglings to the "I hate you" quote on Mustafar showed that he is truly evil.


Plot: The Galactic Republic have suffered major setbacks in the Clone Wars against the Separatists. Anakin Skywalker and Obi-Wan Kenobi infiltrate the flagship of General Grievous (Matthew Wood) ,the cyborg commander of the droid armies, and defeat Count Dooku in a lightsaber fight ending with Anakin singlehandedly decapitating Dooku. Anakin, Obi-Wan, and Supreme Chancellor Palpatine attempt to escape Grievous' flagship, but are trapped inside, forcing Anakin to crash-land the ship on Coruscant. There, Anakin reunites with his wife Padmé Amidala, who reveals that she is pregnant. Anakin is then troubled by visions of Padmé dying in childbirth.

Palpatine places Anakin on the Jedi Council as his representative, but the Council orders Anakin to secretly monitor him and denies him the rank of Jedi Master. Frustrated with the snub, Anakin begins to lose faith in the Jedi and also learns from Palpatine about the ability to prevent death, which can only be used by the dark side. Obi-Wan is sent to the planet Utapau, where he engages and kills General Grievous. Having learned that Palpatine is Darth Sidious and his control of both sides for the war, Anakin reports Palpatine's treachery to Jedi Master Mace Windu. Over Windu's objections, Anakin follows Windu to the chancellor's office. Watch the movie to see what happens next.


Closing comments: If you have not seen this movie stop what you are doing and go to the nearest store that sells movies and go buy it or rent it online right now it is that good of a movie.

Recommended for: If you are human (aliens will like it too) watch the movie. We can't recommend this movie more. 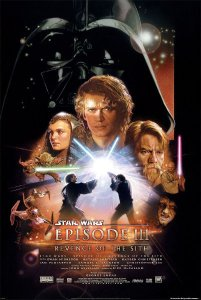