Saxon at A Knight's Quest requested we review X-Men: First Class but we have not seen it yet so we decided to review X2: X-Men United the second movie in the X-Men series.


If you have seen the movie please give it any score from 1 to 10.

Plot: Nightcrawler, a teleporting mutant, attempts to assassinate the President of the United States in the White House, but he fails and escapes after being shot by the vice president. Wolverine heads to Alkali Lake but finds nothing left of the base. He then returns to the school, reunited with Rogue, her boyfriend Iceman, Cyclops, Storm, and Jean Gray. He is requested by Professor Xavier to watch over the children at the school, while Storm and Jean find Nightcrawler with the help of the professor and Cerebro.
Cyclops and the Professor visit Magneto in his plastic prison to see if he had any part in the attack on the President. Reading Magneto's mind, the Professor discovers that a covert government operative, William Stryker, has been extracting information from Magneto. A trap is sprung and Cyclops and the Professor are captured by Stryker and his assistant Yuriko Oyama. A military raid of the X-Mansion begins, with the soldiers sedating every student they find. However, the plan backfires when Wolverine strikes back and kills a large number of Stryker's men, while Colossus, Rogue, Iceman, Pyro, and most of the students escape through a series of hidden tunnels in the school. Wolverine confronts Stryker, who fails to shed any light to his past. Iceman returns, saves Wolverine by creating a wall of ice between him and Stryker, and they both escape through one of the tunnels. Stryker's soldiers had already succeeded in sedating six students and managed to break inside Cerebro.
Impersonating Senator Robert Kelly and Yuriko, Mystique gains information about Magneto's prison and provides a means for him to escape. Wolverine, along with Rogue, Iceman and Pyro head to Iceman's (Bobby Drake's) parents' home in Boston were Bobby reveals his mutant abilities to his parents. After a 9-1-1 call from Bobby's brother Ronny, the police arrive just as the group is about to leave. The X-Jet arrives to pick them up but are attacked by the Air Force, however, they manage to defeat them, and the X-Men team up with Magneto and Mystique.

Plot: 9.7/10- Just like the other X-Men movie X2 has a very original and unique plot for any movie.


Action:9.9/10- Lots of epic fight scene from the opening scene to the end there is a lot of great action in this movie.


Soundtrack: 8.7/10- Better soundtrack than the first.

Overall: 9.8/10- X2: X-Men United is an eXceptional movie (no pun intended) and is the one of the best comic book movies ever.

Closing comments: X2 improved upon the original in ever way possible. 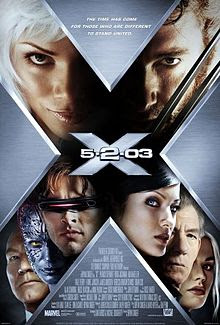 Posted by James the Reviewer at 7:42 AM