My winter anime impressions roll on with my reviews for Tokyo Ghoul √A, Aldnoah.Zero 2, JoJo's Bizarre Adventure, and Samurai Warriors.

Tokyo Ghoul, the anime about ghouls, which are human looking beings that can only survive on the flesh of humans (and coffee). Tokyo Ghoul √A picks up after the abrupt cliffhanger of the first season. Tokyo Ghoul's first season started with three excellent opening episodes and then completely fell on its face throughout the rest of the series with dull characters and painfully over-the-top antagonists. It certainly had moments of intrigue, but it ultimately left me with an exciting concept without any finesse or entertainment with its execution. Apparently, the anime strayed from the manga, but as an anime only watcher, Tokyo Ghoul was just nothing special.
However, from the start of Tokyo Ghoul √A, one aspect piqued my interest: the manga writer, Sui Ishida, has taken the helm as story writer to take the anime in a completely different direction than manga. Now that the series is not following the manga, this "What If" type story poses some interesting ideas and it gives me hope that the series will end on a satisfying note. Maybe this idea of the mangaka writing an alternate version of the story could prove to be an exciting idea for future anime with either poor adaptation or not enough content.
With all that said, four episodes in, Tokyo Ghoul √A might not a great anime, but it is at least showing some promise. With the focus now on the "evil" ghouls, Tokyo Ghoul √A is showing another side of its world. For the first time since episode three of the first season, I am actually enjoying Tokyo Ghoul. Of course there are plenty of flaws, but it is a vast improvement over the first season's later half. Hopefully, the series will give more screentime to Kaneki, since his lack of presence is the only odd thing about the new season’s direction. However, the action sequences are actually fun to watch, and it seems that the series' violence is animated in a way to avoid censorship for the most part, which is appreciated. With that said, Studio Pierrot's animation is still dreadfully dull.
Well, so far so good with Tokyo Ghoul's second season. If you liked the first season, you are sure to be eating this one up (see what I did there?).
Watch if you like: The first season,
*7.0/10*

After last season's shocking cliffhanger, Aldnoah.Zero 2 was one of my most hyped sequels of the winter, and while the outcome of certain things in regards to the finale are questionable, I am remaining open minded since the mind game mecha battles and high production value are making each episode entertaining to watch. With that said, my opinion of the series' first season has dropped slightly compared to my initial review, which you can read by clicking here. Even though the world Gen Urobuchi has created is incredibly fascinating, certain aspects of the plot and characters were not as good as I originally thought them to be. It is still one of the more intriguing sci-fi anime of the last year, and if you are a fan of mecha or Gen Urobuchi's previous work, you should definitely watch the first season.
Anyway, season two is off to an interesting start. Slaine's actions seem questionable at first, but his character continues to shine for being one of the more complex strategist archetypes. On the other hand, Inaho is the classic stoic genius, although he seems like a little more interesting character in this second season.
As for the rest of the series, A-1 Pictures and TROYCA's animation is as stunning as ever, even if the CGI mechas are a bit jarring. Also, the score by Hiroyuki Sawano (Attack on Titan, Kill la Kill) continues to impress, even if it is not as amazing as the first season's score.
Basically, if you watched the first season, you should be watching season two of Aldnoah.Zero!
Watch if you like: The first season,
*8.0/10*

JoJo's Bizarre Adventure continues with part two of the Stardust Crusaders arc. The JoJo's series is one that I really need to get around to reviewing so that I can fully explain why its over-the-top absurdity works so well. However, since this is really only part two of the third arc in the series, I will focus it quality rather than try to give an oversimplified explanation of the series. However, if you enjoy epically muscle-bound dudes using cool shounen powers with plenty of humor, then give JoJo's Bizarre Adventure a watch, but know that the first arc is terrible compared to the rest of the series.
With that out of the way, part two of Stardust Crusaders continues the JoJo's greatness! Episode three was possibly the funniest of the series yet and the new teammate, Iggy, is hilarious! The series is a blast of weekly shounen awesomeness and I cannot get enough! If you watched the previous seasons, you know that you are going to continue watching this one.
Watch if you like: Retro anime, Shounen, Action, Comedy,
*8.2/10* 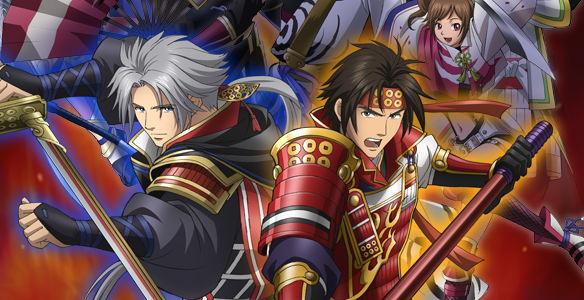 A spinoff of the Dynasty Warriors video games, Sengoku Musou aka Samurai Warriors, is just like every other poorly executed samurai shounen anime that you have ever seen. It takes historical figures, like Nobunaga, and gives them colorful armor, bishounen features, and long flowing hair. The story is apparently set during certain era of Japanese history, and it assumes that you already know the history, which I do not for the most part. Even though I love to see a serious samurai drama like Akira Kurosawa's classic films, Samurai Warriors is, most definitely, not anything special. In fact, it is about as generic as possible. It is not incredibly over-the-top shounen, yet it is not grounded either, which makes for a painfully dull experience. The series is not terrible by any means, just so utterly dull that you lose interest in the story and characters. So, unless you are a fan of the video games, just skip Samurai Warriors. Also, having seen every non-sequel of the winter season, Samurai Warriors is the only one that was boring enough to make me drop it.
Watch if you like: Dynasty Warriors video game,
*4.2/10*

Have you seen any of these anime? What are your favorite winter anime thus far? Please below and let me know, and please check back tomorrow for my impression of The Rolling Girls.

Posted by James the Reviewer at 9:03 AM