Before I continue with the Halloween Countdown, I have changed Friday's post from Trivia to a review of The Avengers "Item 47" short film review and the trivia will be moved to Sunday.
Thoughts: "Who you gonna call?" "Ghostbusters!" That's right, today's review for the Halloween countdown is Ghostbusters. I watched Ghostbusters when I was a kid and I did not remember really liking the movie that much but after watching it again, I really enjoyed it. It was fun, clever, and hilarious at times. Although it is not funniest comedy I have seen, it one of the best comedies because of the original plot and well written characters. But that is not to say it was not hilarious, that are so many memorable lines and jokes and it had perfect combination of of jokes and other forms of humor. It strikes the perfect balance between humor and seriousness, which works brilliantly.

Plot: The following plot summery is copied from Wikipedia.com.
After their first encounter with an actual parapsychological phenomenon (a ghost) and losing their academic positions at Columbia University before they can follow up on their discovery, a trio of misfit parapsychologists — Peter Venkman (Bill Murray), Raymond Stantz (Dan Aykroyd), and Egon Spengler (Harold Ramis) – establish a paranormal exterminator service known as "Ghostbusters" at a retired New York City firehouse. While still facing dire straits after setting up the company, they are summoned by the Sedgewick Hotel to investigate a haunting. At the hotel, they capture their first ghost and deposit it in a "containment unit" located in the basement of their office. Paranormal activity soon increases in New York City, and the Ghostbusters become celebrities containing it, while at the same time becoming increasingly burdened by the hectic schedule. To satisfy increased demand, they hire a fourth member, Winston Zeddemore (Ernie Hudson). Watch the movie to see what happens next.


Plot: 9.6/10- Ghostbusters might have the best plot I have seen in a comedy. There was a good balance of plot and humor despite the somewhat ridiculous premise it can almost be taken seriousness. The script is strong and well written, and the pacing is perfect, always something fun and funny happening.


Action: 6.3/10- Although it is a comedy, Ghostbusters had a few scenes were they were fight and capturing ghosts but it was mostly for humor, which worked is one of things that make it great.


Soundtrack: 9.7/10- The "Ghostbusters" song is my favorite song from any movie and I have even liked it before watching the movie. The licensed music used adds to the movie, unlike many other movies were they only serve to distract.

Comedy: 9.6/10- Although it is not the flat out funniest movie I have ever seen, there are plenty of quotable lines and memorable jokes. Ghostbusters has some of the best written comical dialogue I have seen in a movie and every actor delivers expertly. There are so many memorable lines and scenes from the movie

Would I Watch This Again: This is definitely worth a re-watch sometime. Probably will watch it again on Halloween.

Overall: 9.3/10- Overall Ghostbusters in an excellent mix of humor, original story, and hilarious jokes. Easily one of the best comedy ever made.


Closing comments: Ghostbusters is pure fun to watch, I had a large grim on my face throughout most of the movie. "Who you gonna call?" "Ghostbusters!" 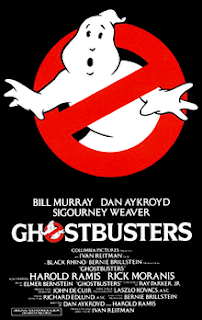